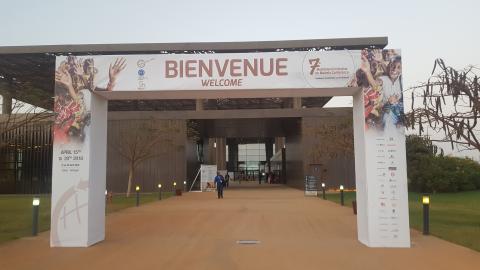 Presentation: “Current status of Malaria Control and Elimination” -  Dr. Pedro Alonso, Director of WHO Global Malaria Programme
“To know where we are, we need to know where we are coming from”. That’s how Dr. Alonso started his overview of the stage of malaria. This year is the 70th anniversary of WHO. When WHO was first launched there was general consensus that “we had the tools, we knew how to do it, and we just had to go out and do it”. Today, 70 years later, we are still facing big challenges to globally eradicate malaria. Looking at the achievements over the past fifteen years, 2000-2015, there has been tremendous progress mainly because of scaled-up vector control, improved diagnosis and availability of new first line treatment. This resulted in 50% reduction of malaria mortality. WHO 2016 figures of global malaria cases showed that a decrease has come to a halt and even showed early signs of reversal.

Presentation: “Challenges and perspectives ending malaria: the role and contributions of health systems” - Prof. Fred Binka, University of Health and Allied Sciences, Ho, Ghana
Prof. Binka presented the importance of integrating national health systems into the Global Technical Strategy framework. The tools for malaria elimination are available, but we need a vehicle to eradicate malaria. The national health systems need to be adapted to the local malaria transmission. Stratification and identification of different transmission levels within each country ask for an area approach within the national program: “No more one strategy fits all”. Furthermore, improved health systems require more trained community health workers who can move beyond national health systems. In order to achieve malaria eradication, it is essential to share data across countries and develop a malaria elimination database that is required to clear transmission across different countries. “A strong but flexible health system is the vehicle to get us to zero.”

Symposium: "Benefitting from the diversity of field parasites in Africa to better guide the discovery and development of next generation of antimalarials"
Interrogation of the parasite lifecycle using both laboratory and field strains of parasites, is key in the development of next generation of antimalarials before human trials, according to Medicines for Malaria Venture’s (MMV) Didier Leroy.  African artemisinin treatment failure to date is distinct from South East Asian parasite strains.

Colin Sutherland from the London School of Hygiene and Tropical Medicine explored the evidence for intra and inter-species differences in antimalarial susceptibility and their relevance for drug discovery. An analysis of African and Asian parasite strains showed that whilst PfKelch13 and pfpI4k mutations were responsible for Artemisinin resistance in Asia, in contrast to Africa, other mutations like Pfap2mu, pfubp1 and Pfcoronin could be driving the resistance.

In an in vivo susceptibility testing of clinical P. falciparum isolates from Ivory Coast, Kigbafori Silue, Centre Suisse de Recherches Scientifiques en Cote d'Ivoire (CSRV) observed that Chloroquine resistance is still present in their field site. Through collaborative efforts between MMV and CSRV a laboratory was established that has successfully screened a panel of 24 MMV compounds with different efficacy profiles.

Issa Nebie Ouedraogo, from the Centre National de Recherche et de Formation sur le Paludisme (CNRFP) in Burkina Faso highlighted the challenges faced by scientists in resource limited settings in collecting field isolates for drug discovery. Technical challenges, consumables procurement as well as unavailability of quality reagents and ethical issues are common obstacles. He concluded that whilst challenges abound, training of core African Scientists would mitigate some of these issues.

Symposium: "Digital approaches for improved malaria case management, surveillance and response"
In the era of technology and innovation, malaria can't stay behind. Four experts shared with us their experience using digital surveillance platforms in Mozambique.

Arnaud Le Menach from the Clinton Health Access Initiative (CHAI) talked about the importance of a comprehensive malaria surveillance system that offers optimal flow of information for strategic and operational decision-making. He provided an example from Mozambique, where mHealth tools are relied upon to support both health information repositories and decision-making.

A second example was from the Malaria Consortium, where Karin Källander and Arantxa Roca discussed lessons from implementing and institutionalising digital health platforms for community service delivery in Mozambique. The system in Mozambique is already being successfully used to generate routine passive case detection data to support malaria elimination efforts. An interesting component of Karin’s presentation was the illustration of how routine data submitted through the systems is visualized on DHIS2 dashboards, and linked with other systems. In Dr Arantxa Roca’s presentation, there was an additional emphasis on how the digital approaches are being used to enhance malaria surveillance and control in the country.

Pedro Aide (on behalf of Francisco Saúte), researcher at Centro de Investigaçao em Saúde de Manhiça (CISM), pointed out how to set the way for elimination in low endemic areas of Mozambique strengthening the malaria surveillance system. This presentation focused on CISM’s experience in expanding the DHIS2 surveillance platform to all Health facilities and community workers of 8 districts in Maputo and Gaza provinces in Southern Mozambique. He also described the reactive case detection and response systems established in the pre-elimination district of Magude.

Dr Kigbafori D. Silue from the Centre Suisse de Recherches Scientifiques en Côte d’Ivoire (CSRV) gave the first presentation, which focused on the performance of LAMP for detection of Plasmodium infections in asymptomatic carriers. Results were presented from a study carried out in one district in Côte d'Ivoire, where blood samples were collected from 390 households for evaluation of LAMP. The proportion of asymptomatic carriers was high, and LAMP was positively received by the local authorities. However, the researchers also noted that performance of LAMP is expected to further improve and that there are on-going PCR tests to validate this. At the end of his talk, Dr. Silue emphasized the urgent need to adapt sensitive tools in order to target asymptomatic malaria infections in Côte d'Ivoire.

Beatriz Galatas from ISGlobal presented results of a 2017 cross-sectional study conducted in two sites in Mozambique, where four diagnostic tools were compared. The diagnostic tools included ultra-sensitive rapid diagnostic tests (uRDTs) and regular RDTs. The team found that although uRDTs could detect lower parasite densities, these diagnostic tests had only marginal benefits compared to RDTs, due to relatively high numbers of false positives and few additional detected infections. Finally, she discussed whether uRDTs should be recommendable for clinical use, and the potential use for test and treat campaigns and for prevalence monitoring at the community level.

The final talk in this symposium was given by Prof Babacar Faye from the Department of Parasitology, Faculty of Medicine, Cheikah Anta Diop University of Dakar, and also a co-organiser of the MIM conference. Dr Faye also presented on the use of LAMP for detection of Plasmodium falciparum infections in asymptomatic carriers, this time in Kaolack region of Senegal. He re-emphasized that in order to reach elimination, the asymptomatic carriers need to be identified and treated and that tools such as LAMP could have potential to overcome the limits of RDT and microscopy. The study was conducted in 2015 and involved 1250 samples. Prof. Faye’s group found that a large number of samples were pan positive and pf negative, with a higher sensitivity for non-falciparum infections. LAMP could help in mass screening and treatment (MSAT) strategies and could fill the gap for needed sensitive tools at points of care. The results were shared with the national malaria control program in Senegal (PNLP) and interest exists for feasibility studies of using LAMP in MSAT programs in order to tackle asymptomatic malaria reservoirs. 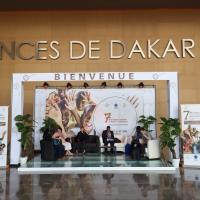