ASTMH 2018, Moses R. Kamya: "The impact of malaria control interventions on malaria burden in the historically high malaria transmission district of Tororo, Uganda: a meta-analyses of longitudinal studies from 2007 to 2017"

Title: "The impact of malaria control interventions on malaria burden in the historically high malaria transmission district of Tororo, Uganda: a meta-analyses of longitudinal studies from 2007 to 2017"

There is limited evidence of reductions in malaria burden in high transmission areas of Africa. Understanding the impacts of malaria control interventions is critical to guide strategies for malaria control in hyper-endemic regions. Over a 10-year period (2007-2017), we measured the impact of various malaria control interventions in cohorts of children enrolled in 7 clinical trials and observational studies in Tororo, Uganda, a historically high transmission area with a baseline annual EIR of 310. Interventions included individually assigned chemoprevention regimens, population level universal LLIN distribution in November 2013 and repeated rounds of IRS starting in December 2014. All children received LLIN at enrollment and standardized approaches were used to follow cohort participants including prompt treatment for malaria with ACTs. We measured the incidence of malaria using passive surveillance and parasite prevalence by microscopy at regularly scheduled routine visits. Meta-analyses of a combined data set were performed to estimate the protective efficacy (PE) of the various control interventions. A total of 2148 children were followed over 5136 person years resulting in16698 treatments for malaria, including only 116 (0.7%) treatments for severe malaria and 2 deaths with malaria. Considering observation time between 0.5-2 years of age, in the absence of chemoprevention and before the implementation of IRS (reference group), the incidence of malaria was 5.0 episodes per person year (PPY) and parasite prevalence was 15.2%. The most dramatic declines followed the implementation of IRS (malaria incidence 0.47 episodes PPY, 90% PE; parasite prevalence 3.9%, 74% PE) and especilally among children receiving chemoprevention with monthly DP (malaria incidence 0.03 episodes PPY, 99.5% PE; parasite prevalence 0.9%, 94% PE). In our cohorts, where we provided LLINs and prompt treatment with ACTs, the risks of severe malaria and death were extremely low. In a historically high malaria burden area of Uganda, the combination of IRS and chemoprevention with monthly DP has almost eliminated malaria in young children. 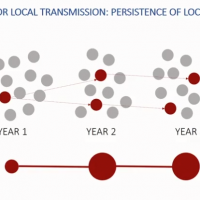 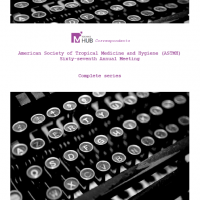