Plasmodium falciparum malaria is a leading cause of morbidity and mortality in developing countries, infecting hundreds of millions of individuals and killing up to one million children in sub-Saharan Africa each year 1,2. In holoendemic areas, children suffer the most from malaria, particularly after six months of age. Both the relative resistance to infection and severe malarial disease (SM) expressed by neonates and young infants, as well as the hypothesis that this resistance is mediated by maternally derived IgG has been recognized for decades 3-5. Despite these early observations, the targets of protective, maternally derived cord blood antibodies remain elusive. Recently, we demonstrated that antibodies to Pf Schizont Egress Antigen-1 (PfSEA-1) predict decreased risk of SM in 1.5-4 yr olds living in a holoendemic area of Tanzania 6. Here we demonstrate, in the same cohort, that maternally derived anti-PfSEA-1 antibodies cross the placenta, are detectable in cord blood, and cord blood levels of these antibodies predict significantly decreased risk of SM in infants for up to 12 months after birth. Further, in maternal vaccination studies in mice, pups born to dams that were immunized with PbSEA-1 prior to pregnancy had significantly lower parasitemia and longer survival times following lethal P. berghei ANKA challenge compared to pups born to dams treated with adjuvant alone. Together, these results identify, for the first time, a parasite specific target of maternal antibodies that transfer to the fetus and are associated with protection from SM and suggest that vaccination of pregnant women with PfSEA-1 may afford a survival advantage to their offspring. 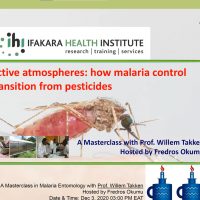 The role of chemosensory proteins in conferring pyrethroid resistance