A living database which captures research projects and institutions’ portfolios in malaria elimination and eradication.

This is an active Deep Dive and we welcome your contributions! If you are currently involved or planning research and / or programatic activities on Anopheles stephensi please contact MESA (mesa@isglobal.org) or add your project to the database.

The Anopheles stephensi mosquito has long since been considered an Asian malaria vector. It is native to parts of South-East Asia and parts of the Arabian Peninsula. However, in recent years there has been a change in this vector’s global reach. Its recent emergence in the Horn of Africa, Sri Lanka and West Africa attest to its ability to spread to new geographical regions.

This predominantly urban vector, which had never before been detected in Africa, was first identified in Djibouti (2012) where it was implicated in an urban malaria epidemic. It was subsequently identified in Ethiopia (2016) and Sudan (2019). It has now spread extensively within Sudan including areas bordering six countries previously assumed to be An. stephensi free [ref].  In 2017, Sri Lanka  reported abundant findings of An. stephensi larvae. This poses a potential threat of malaria reintroduction in the country which was certified malaria free by WHO in 2016. The WHO released a vector alert in 2019 urging countries in and around the Horn of Africa and in Sri Lanka to take immediate action in stepping up vector surveillance to integrate An. stephensi [ref]. WHO Malaria Threats Map further named this invasive species as one of the main biological threats to malaria control. More recently a 2020 sampling has detected An. stephensi in Nigeria which is located in West Africa, the opposite end of the African continent from the vector's initial point of detection.

Malaria transmission in Africa has been overwhelmingly rural, but this could change with the advent of An. stephensi which is an efficient urban malaria vector with the capacity to transmit both Plasmodium falciparum and Plasmodium vivax. It also has the propensity to bite both indoors and outdoors and feeds on both animal and human blood. Furthermore, it is resistant to several classes of insecticides. In Africa, the rapid urbanisation of cities and sub-optimal urban planning could potentially play a major role in An. stephensi species establishment. Poor garbage disposal coupled with disruption in pipe-borne water supply facilitates the breeding of the An. stephensi mosquito [ref]. Its larvae thrive in man-made water tanks, poorly discarded plastic containers, wells and fresh pools of water. Containment of this new biological threat will require extensive research on spread and transmission patterns, composition, dynamics, distribution and behaviour in its new context.

This Deep Dive which is done in collaboration with the Roll Back Malaria Vector Control Working Group (RBM VCWG) aims to describe the landscape of recent and ongoing An. stephensi research and investment. We hope it will be beneficial in identifying any existing research gaps. 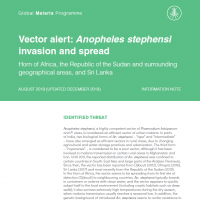