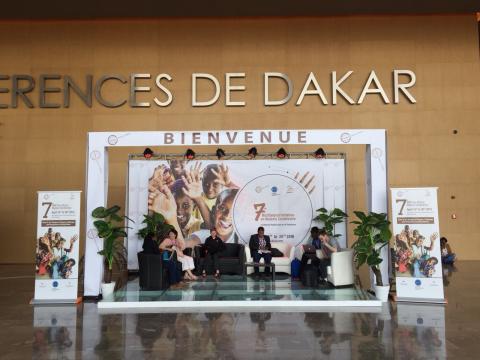 Dr Mwenesi’s presentation focused on the engagement of communities in malaria control in order to enhance people’s responsibility to take care of their own health. She stressed that this behavioural change is needed to build on the successes that have been achieved in combating malaria in the past. She said that community engagement improves equity, inclusivity, coverage, access and quality of health care. An important highlight of her presentation was the concept that in order to engage communities, information alone is not enough, and that sensitisation, mobilisation and involvement are required to empower the community. Looking forward, she pointed to three implications of this community engagement: first, the need for better ways to engage communities, second, the potential to use models to predict human behaviour and to measure impact of behaviour change and lastly, the utilisation of IT advances to expand the possibilities around implementation and delivery strategies.

"Eradication of malaria and eradication of poverty: A 2030 SDG nexus?" - Prof Jean-Paul Moatti, CEO of IRD and member of UN Expert panel for GSDR 2019.

Prof. Moatti’s lecture focused on the idea that even though extreme poverty has significantly reduced over the past years, the benefits of the increase in wealth have not been equally distributed. In order to achieve malaria eradication, we shouldn't just focus on malaria itself, but address it in relation to the Sustainable Malaria Goals (SDG’s) in general and the SDG 3 “Good health and well-being” in particular. Universal health coverage with a guaranteed package of basic health services could contribute to preventing illness and reducing poverty. Understanding the interaction between malaria and other SDGs will create positive synergies that contribute to eradication of malaria. Prof Moatti ended his talk with the final mobilizing message “Let’s impose solutions to the poverty – malaria – inequalities – nexus in the 2030 SDGs agenda”.

The plenary was chaired by Prof Wilfred Mbacham, from the University of Yaounde.

Symposium: “How to confirm absence of transmission in the last step towards elimination?”

This session revolved around the critical need for local evidence confirming transmission or no transmission in areas targeted for malaria elimination.

Prof. Chris Drakeley, from the London School of Hygiene and Tropical Medicine (LSHTM), talked about essential measures necessary to document malaria elimination and the role that serology could play in the context of heterogeneous transmission. To obtain these metrics, we need to employ either cross sectional surveys using sentinel populations or transmission assessment surveys. Prof. Drakeley highlighted various metrics that could be used, but also stated that since these different metrics have limitations, combinations of them should be used to provide a more complete picture. He also stated that serological assays can provide an additional approach to show absence of exposure, but robust health systems and passive surveillance detection are key to confirmation of elimination.

After the introduction by Prof. Drakeley, three researchers from the Malaria Control Elimination Partnership on Africa (MACEPA), presented methods and results from surveys to assess malaria parasitemia and serological prevalence in near-zero transmission settings in Senegal, Ethiopia and Zambia.

Dr. Yakou Dieye, senior technical officer from PATH-MACEPA Senegal, pointed out that data from an easy-access survey in children provided similar conclusions to the community-based survey, as they are operationally easier and might be a good alternative to the more expensive community surveys. Besides, serological-surveys might be an appropriate complement to clinical surveillance data to validate surveillance results.

In the same framework, Dr. Asefaw Getachew, senior technical advisor from PATH-MACEPA Ethiopia, stressed that, even though there were zero reported passively detected local cases in the two last years, seroprevalence showed that there was still some residual transmission. Importation could play a role in this residual transmission.

Lastly, from PATH-MACEPA Zambia, Dr. Mulenga Mwenda, laboratory scientist, focused on the molecular surveillance in areas approaching malaria elimination in Southern Zambia, a region with much higher prevalence than Senegal and Ethiopia. She raised the interesting question, “Is zero really zero?” and discussed how we could be sure that no reporting meant zero malaria cases. The overall conclusion was that serological markers could be more sensitive than RDTs or PCR to be used in the final steps towards elimination.

Closing this symposium, Dr. Gillian Stresman, research fellow of immunology & infection at the LSHTM, focused on Freedom from infection (FFI), a term used to describe the probability of having an infected animal if there is one in the herd/flock/population in situations where surveillance activities have detected no infections. The FFI tools provide a potential standardized approach for informing decision-making that is being explored for use in malaria. However, questions on the applicability of these tools on malaria and other human diseases still remain.

This session examined the need for countries to set and own the agenda for local malaria elimination, while also integrating within the global health agenda as outlined in the WHO Global Technical Strategy of 2015. The WHO Global Malaria Programme was represented by Dr Kim Lindblade and Dr Abdisalan Noor. Dr Lindblade presented the updated 2017 framework for malaria elimination. This provided guidance on the tools, activities, and strategies required to achieve malaria elimination and prevent re-establishment of transmission in countries. She clarified that a set of interventions containing four components are recommended, including: a) enhancing and optimizing vector control and case management; b) increasing the sensitivity and specificity of surveillance tools; c) accelerating transmission reduction, and d) investigating and clearing individual cases. She emphasized that political and financial commitment are important conditions to prevent re-establishment of malaria transmission. The framework presented by Dr. Lindblade is intended to inform national malaria elimination strategic plans and should be adapted to local contexts. Following this talk, Dr Noor provided an overview of the “Malaria surveillance, monitoring & evaluation: a reference manual”, of the WHO Global Malaria Programme.

To provide a perspective from endemic countries, participants in the symposium could hear insights from Zambia and Senegal, mostly focusing on the current efforts and recent successes from these two countries. Dr Elizabeth Chizema Kawesha, Director of the Zambia National Malaria Elimination Centre, presented their National Malaria Elimination Strategy, which was launched in 2017. She explained that the rationale for the strategic plan was the drastic decrease of malaria cases between 2001-2017. The Zambia elimination strategy targets specific high-priority areas with a package of interventions, selected based on transmission levels. Here, districts with 50 or more malaria cases per 1,000 people focus on reducing the disease burden and strengthening health systems. On the other hand, districts with fewer than 50 cases per 1,000 people mainly focus on surveillance as one of the key interventions. With this strategy, Zambia aims to achieve malaria elimination by 2021.

Dr. Médoune Diop, from the Ministry of Health of the Republic of Senegal, provided an overview of the strategies that were implemented in Senegal between 2001-2017, with a particular focus on surveillance and elimination issues, process, progress and challenges. He showed how Senegal has adjusted their monitoring system over time, resulting in a decrease of malaria morbidity and mortality between 2013-2017. He finally stressed the need to adapt surveillance, monitoring, and evaluation according to the progress made towards malaria elimination.

Scientific advancements, regulatory affairs and stakeholder engagements are all critical pillars in the development and acceptance of any new technologies for malaria control. According to Dr. Jonathan Kayondo of the Uganda Virus Research Institute (UVRI), the need to consider all these components is even greater for genetic modification approaches, particularly the potential use of gene drives to reduce Anopheles mosquito populations in Africa. Dr. Kayondo was speaking at a special symposium organized by Target Malaria, a non-for profit research consortium, championing a multi-layered strategy for evaluating the use of genetically modified mosquitoes, particularly the use of gene drives for malaria control and elimination. In gene drive systems, new traits deliberately introduced in Anopheles mosquitoes can rapidly spread through interbreeding populations of malaria mosquitoes from very low initial introductions, and can persist in those mosquitoes indefinitely or until the target mosquito population is locally eliminated. Dr. Kayondo described various steps that his team is taking, with examples of work in Uganda and other African countries and explained why multisectoral championship is desirable to ensure eventual success of such approaches. It is expected that if successful, the gene drive approaches would become very high impact interventions for large-scale and rapid control of malaria transmission, either by transforming the mosquitoes to be refractory to malaria parasites or by causing their populations to dwindle so much that they can no longer sustain transmission.

Ace North, from the Oxford University, delivered a talk on a model simulation of gene drives control of malaria vectors in Burkina Faso. Key objective was understanding the dry season survival of mosquitoes, and how these may impact the gene drive technology application in Africa. Dr. North clarified that this iss still work in progress, but that the models show great promise of this technology in the African context.

Tibebu Habtewold, from the Imperial College, gave a talk on mosquito population replacement strategies driven by CRISPR/CAS technology targeting the ookinete-oocycst developmental stage. The aim is to stop populations of Anopheles gambiae from transmitting malaria in wide geographical areas using gene drive. He emphasized that their approach, which uses high safety standards with Mobile Insectary Laboratory (MIL) modules, will overcome some of the challenges of setting up gene drive technology research, by enhancing tests and evaluations of transgenic mosquitoes in disease endemic countries.

An increasing number of African scientists expected to play leading roles in implementation of gene drive technologies in Africa, have been trained by the Pan African Mosquito Control Association (PAMCA) and Target Malaria. This was the message by Prof. Antonio-Nkodjo Christophe (Board Member PAMCA).The training included focus group discussions on public health benefits of gene drive and how to facilitate a smooth introduction in Africa. PAMCA is playing a critical role in meeting the challenges facing gene drive implementation in Africa by assisting in changes to Biosafety regulation and securing political endorsement by the African Union assembly.

Peter Winskill, from the Imperial College spoke on challenges faced by current vector control tools of insufficient insecticide treated bed nets coverage, outdoor biting mosquitoes, insecticide resistance and resurgence of cases. While the existing tools have been effective, they may not be enough and gene drive technology would possibly cover the gaps. A model of the effects of the addition of genetically modified mosquitoes to the global technical strategy toolkit showed promising results. Gene drive technology may play a key role in future efforts towards elimination.

Lastly, Prof. Lizette Koekemoer, from the University of Witwatersrand in South Africa and chair of the Symposium guided the active participants in a Q&A session exploring various issues on gene drive technology. 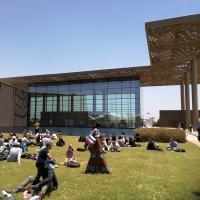 Moving towards malaria elimination by strengthening surveillance in Mozambique