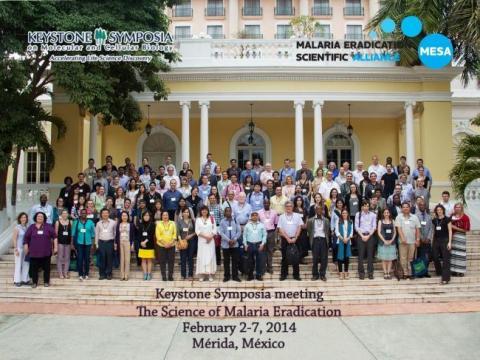 The Keystone symposium 'The science of malaria eradication' ended with a common appreciation of bringing together scientists from completely different disciplines, but whose work is led by the singular goal of clearing malaria infection from the entire world. "We need to put our own work in perspective and identify what really needs to be done", said Chetan Chitnis (International Centre for Genetic Engineering and Biotechnology, India), one of the three scientific co-organizers, during the closing remarks that followed an inspirational talk by Peter Agre (Johns Hopkins Malaria Research Institute, USA).

The day's sessions were devoted to parasite-host interactions, and surveillance for eradication. The morning session started with Robert Sinden (Imperial College London, UK) who presented an overview of a number of basic biology research questions. Pending questions include, identifying the small parasite populations which mediate transmission across the dry season, understanding how immunity is induced and assessing the weakest points in the parasite life cycle. He also referred to innovative work looking at multiple transmission cycles, and male-female parasite sensitivity to antimalarial compounds.

With a specific focus on P. vivax, Hernando del Portillo Obando (CRESIB-ISGlobal, Spain) followed with insights into reticulocyte-derived exosomes and their potential significance in the science of malaria eradication. Contrary to the dogma, he showed new evidence that almost every cell of the immune system involved in the response to P. vivax can produce exosomes and that they are likely to play a role in remodelling the spleen. Promising applications will be explored in future work such as therapeutics and rapid diagnostic tests.

Other talks focused on the biology of gametocytes. Oliver Billker (Wellcome Trust Sanger Institute, UK) talked about the function of APiAP2 genes and calcium signalling pathways in gametocyte activation and development; Gabriele Pradel (RWTH Aachen University, Germany) unveiled the role of perforine-like proteins in gametocyte egress, and finally Abhinav Sinha (Gardi Medical College, India) presented work on gametocyte non-producer mutations and the discovery of a transcriptional regulator which could be taken forward as a transmission-blocking target.

Jumping from the basic biology in laboratories, to operational challenges in the field, in the afternoon session speakers and participants discussed the role of surveillance for elimination. Based on the premise that "each case identified has a source that can be identified", the importance of active and passive surveillance and the concept of 'effective reproductive number' were discussed.

The meeting closed with amusing and thoughtful perspectives from Nobel Laureate Peter Agre (Johns Hopkins Malaria Research Institute, USA). "Science brings people together", said Peter Agre, who reflected on his personal experiences in research. His talk made particular note of the role of young researchers, from all parts of the globe, as well as science's ability to scale international barriers and the importance of creative thinking.

Overall, 170 people from 37 different countries attended the meeting. Encouraging the audience to "evaluate what we are doing and see how we can do better", Chetan Chitnis trusted that the multidisciplinary dialogue on the science of malaria eradication will continue, and that the Malaria Eradication Scientific Alliance (MESA) will be there in the future to encourage it.

This blog was written by MESA Secretariat, and posted simultaneously on MESA's blog on MalariaWorld and ISGlobal's blog. 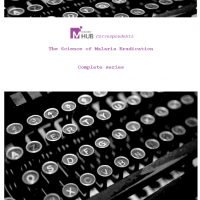 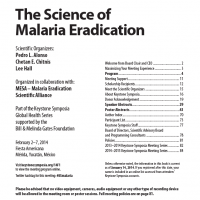