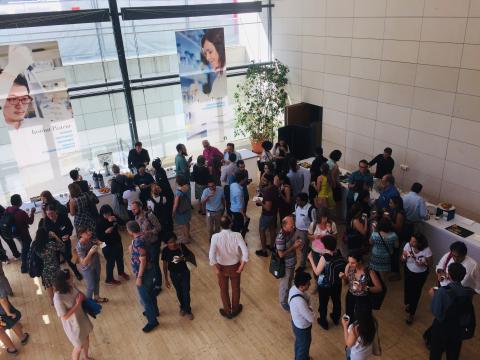 Wrapping up the 7th International Conference on Plasmodium vivax Research, day three focused on the topics of P. vivax drugs and approaches for P. vivax elimination.

Kevin Baird (Eijkman Oxford Clinical Research Unit, Indonesia) started with the history of 8-aminoquinolines, and the link between their treatment development and the needs of soldiers at or returning from war. Thus, the primary purpose of these drugs was to address this need, without sufficient investigation of the observed haemolytic toxicity, nor adequate prioritization of the needs of the majority rural populations that would be the end users. The most recently developed hypnozoicide, tafenoquine, was selected during drug discovery trials due to the extended half-life of the drug (16 days). It was subsequently discovered that tafenoquine is just as haemolytically toxic as primaquine. Kevin emphasised that the history of 8-aminoquinine development demonstrates a rush towards implementation, without sufficient investigation into optimization of drug efficacy and reduced toxicity in combination with partner blood schizonticides.

Marcus Lacerda (FIOCRUZ, Brazil) also talked about the extensive list of current issues with primaquine; course length, lack of paediatric formula, issues with CYP2D6, limited drug production, temperature and humidity instability and that testing for G6PD deficiency increases costs for control programmes. The Roll-oUT study in Brazil is trying to supplement primaquine use by introducing tafenoquine to treat P. vivax in patients with at least 70% glucose-dehydrogenase enzyme activity. Over a year they hope to treat 10,000 patients and gain more understanding of how tafenoquine could improve malaria treatment standards.

The assessment of drug treatment in G6PD-deficient individuals was investigated retrospectively by J De Brito Sousa (Tropical Medicine Foundation Dr Heitor Vieira Dourado and Amazonas State University, Brazil), who used historical clinical data of hospitalised P.vivax-infected patients to assess the adverse reactions of primaquine treatment. He found that most individuals were admitted on the 3rd or 4th primaquine dose and 58.5% had severe anaemia. Almost half of the patients required transfusions, reiterating the need for quantitative G6PD deficiency diagnosis to improve the safety of 8-aminoquinoline administration.

The presentation by Kamala Thriemer (Menzies School of Health Research, Australia), on behalf of the hard work of the IMPROV Study Group, showed their findings on the non-inferiority analysis of short-course, high-dose primaquine, compared with the 14-day treatment protocol. For primary and secondary endpoints including one-year recurrence rates, 42-day cure rates and both asymptomatic and symptomatic risk, the 7-day schedule demonstrated comparable effectiveness, and this study confirmed the major reduction of infection recurrence with primaquine treatment compared to the placebo arm. There remained some challenges in gastrointestinal tolerability, which would need to be addressed to truly ameliorate patient adherence.

Robert Commons (Menzies School of Health Research, Australia) discussed a trial comparing the efficacy of artemether-lumefantrine (AL) and dihydroartemisinin-piperaquine (DP) with and without primaquine (PQ). At day 42 there was a 12-fold increase in risk with the use of AL over DP alone. The use of primaquine additionally reduced the risk by 37%. Robert James (Walter and Eliza Hall Institute of Medical Research, Australia) presented his work in the Solomon Islands investigating efficacy of P. vivax treatment policies in this specific context. It was determined that the current AL+PQ combination is sub-optimal for preventing recurrence and that even in a controlled setting there was risk for haemolytic toxicity.

Bob Taylor (MORU, Thailand) examined haemoglobin dynamics following weekly primaquine administration in G6PD-deficient and G6PD-normal individuals in a Cambodian study, noting that G6PD deficiency, high initial parasitaemia, and thalassaemia were associated with the most rapid declines in haemoglobin concentration. Expanding hypnozoicides for paediatric treatment would target a considerable infected population and Hema Sharma (GlaxoSmithKline) shared a population pharmacokinetic model that was used to calibrate an ongoing paediatric clinical study. Ghyslaine Bruna Djeunang Dongho (University of Cameroon, Cameroon and Sapienza University of Rome, Italy) evaluated the considerations for appropriate P. vivax treatment in Duffy positive and negative individuals in Cameroon. The study found that 99% of patients were CYP2D6 normal metabolisers and there was a low G6PD deficiency proportion. Narimane Nekkab (Institut Pasteur, France) described the utility of a robust mathematical model to approximate the impact of tafenoquine in Brazil, showing the complex variety of treatment pathway options and estimating a 60% decrease in incidence rate associated with change in treatment policy.

Pedro Alonso (World Health Organization) provided a perspective on national and international policy and guidelines for elimination. He described the apparent division of countries into two groups; those that are nearing elimination and high burden countries. He mentioned that P. vivax is often the residual parasite, with recent examples of Sri Lanka and China. Pedro underlined these examples, and more, to show that elimination of P. vivax is possible, but that robust health systems and political willpower are major determinants of success. He insisted that elimination is based on three pillars, universal access, acceleration towards elimination, and surveillance tools that will help the global technical strategy against malaria. The need to accelerate the malaria elimination effort and new tools and technologies such as diagnostics, novel drugs and vaccines is the best way to do this.

Francois Nosten (Shoklo Malaria Research Unit, Thailand) examined the necessity of P. vivax-specific control measures to achieve malaria elimination; asking if, when and how these should these be implemented. Examples of increasing P. vivax under intense falciparum-focused intervention at the Thai-Myanmar border, alongside Sri Lanka’s achievement of elimination of both parasites at approximately the same time, showed that it is imperative to know how P. vivax behaves in different contexts. He emphasized that the sub-microscopic reservoir of P. vivax can sustain transmission and that this reservoir may require targeted efforts such as mass drug administration.

Insights into the evolution of P. vivax was the overarching objective of the work presented by Sarah Auburn (Menzies School of Health Research and Charles Darwin University, Australia) from the vivax Genomic Epidemiology Network (vivaxGEN). This group aims to provide increased access to and utility of vivax-specific genomic tools, with a variety of potential use-cases. She gave an example of the general action plan relating to two priority applications: detection of antimalarial resistance and identifying imported infections. The plan includes; creating a collaborative network with high geographic scope, developing tools for high-throughput genotyping, producing online tools for data sharing and partnering with countries for pilot studies.

Nicanor Obaldia (Instituto Conmemorativo Gorgas de Estudios de la Salud, Panama and Harvard T.H. Chan School of Public Health, United States) provided an example of the insights to be gained from P. vivax genetic analysis in the pre-elimination context of Panama. Using selective whole genome amplification from samples gathered between 2009 and 2012, it was determined that there was low local diversity, and evidence of clusters that were genetically related to parasites from South America. Due to changes in population movement through Panama, future analysis with samples from 2014-2019 may reveal interesting spatial patterns.

Jason Rosado (Institut Pasteur and Sorbonne University, France) discussed the difference in sensitivity between light microscopy and PCR and suggested that the measurement of antibody responses to previous infections could aid with the detection of latent hypnozoite carriage. He proposed a modification to standard MDA called SeroTAT, which would treat only those who have antibodies present. This could reduce the number of people that would have to take an unpleasant primaquine course by 80%.

Two turbo talks concluded the scientific sessions. Sadudee Chotiriat (Mahidol University, Thailand) confirmed that RBP2b could be used as a proxy for recent exposure in Thailand and that serological exposure markers could be used to improve detection of asymptomatic infection burden. Finally, a completely different, but vitally important, subject was covered by Angela Devine (Menzies School of Health Research and University of Melbourne, Australia). She estimated the global economic cost of P. vivax to healthcare providers and patients was US$533 million per year, but that the introduction of G6PD deficiency testing could reduce this by US$234 million.

The session began with a series of individual questions/answers posed to the panellists. Alejandro explained that Peru has a credible road-map for elimination as the government has recently fully endorsed it through a permanent law approved by Congress. Scott recognized the enormous progress that the vivax research community has achieved in the past years, particularly in developing and implementing technologies in areas such as diagnostics and drug discovery. However, he made an appeal to reinforce the study of vector biology in the next ICPvR as novel and promising technologies have been developed. Pedro was asked how WHO acquires and maintains government's commitment to malaria elimination. He provided insight that governments need to feel they have ownership and leadership in order to commit to complete malaria elimination programmes. Fitsum reinforced the importance of developing local individual strategies for elimination and drilled into this concept by explaining the different areas of transmission of P. vivax (above 1000m in the mountains) and P. falciparum (below 1000m in lowlands) in Ethiopia. Neena emphasised that India is responsible for nearly 50% of the burden associated with P. vivax infections and that surveillance needs to be tailored for each area. Her wish is for increased collaboration to help overcome the current challenges in P. vivax research. Alexandra reinforced the importance of accurately determining the burden of vivax infections in children to elaborate a precise investment plan for this vulnerable population. Kevin expressed his belief that an operational and cost-effective G6PD test would revolutionise progress towards elimination. On the other hand, Pedro encouraged researchers not to abandon vaccination development efforts as they represent a cost-effective public health tool that could accelerate us towards elimination. Moreover, he appealed to hear more from researchers, particularly those working on the ground, to report any areas they would like additional guidance from WHO to support control efforts.

Chetan Chitnis (Institut Pasteur, France) ended by acknowledging the funders who made possible the 7th edition of ICPvR, in particular, the generous gift by the Bill and Melinda Gates Foundation, the invaluable help of the local and international Scientific Committees and the essential and effective help of the Secretariat at Pasteur. Last, it was announced that the 2021 ICPvR will be held in India! 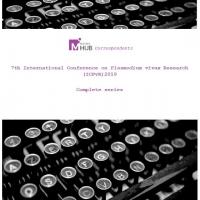 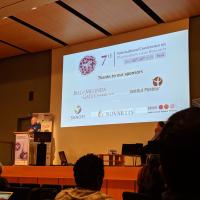