The 70th Annual ASTMH virtual meeting started with the Young Investigator Award Sessions. These awards are given for work presented by young investigators to recognise their work and to encourage young scientists to pursue careers in tropical disease research.

1109 - Predictors and associations with maternal and birth outcomes of Plasmodium falciparum infection in the first trimester among nulliparous women from the Democratic Republic of the Congo, Kenya, and Zambia

Felicia N. Watson (University of Washington, United States of America) commenced her talk by highlighting the global malaria burden and how it has been exacerbated by this COVID-19 pandemic. She mentioned the role of pre-erythrocytic vaccines in fighting malaria. Her study  focused on how to improve the translational potential of a liver stage vaccine that induces liver-resident memory CD8+ T (Trm) cells in experimental mice. She investigated methods to improve the translational potential of Prime-and-Trap by reducing the radiation-attenuated sporozoites (RAS) dose, eliminating the intravenous (IV) administration requirement, and adding a co-administered glycolipid adjuvant, 7DW8-5. She observed that 7DW8-5 has translational potential, Prime-and-Trap efficacy is durable with or without 7DW8-5 for at least 4 months, and co-administration of RAS + 7DW8-5 protected mice with a 4-fold lower dose and can protect after Prime-and-Trap when administered intradermally. Hence, this first generation Prime-and-Trap is a promising and easy to deliver vaccine strategy.

Nina Brunner (Swiss Tropical and Public Health Institute/ CARAMAL Consortium, Switzerland) research presentation was on rectal artesunate administration in children with suspected severe malaria. Rectal artesunate is a pre-referral treatment for children with suspected severe malaria, administered by either community health workers or health workers at primary health centres.  Her study was done in Nigeria, Uganda, and the Democratic Republic of Congo (DRC). The study findings revealed that rectal artesunate administration is associated with lower referral completion in DRC. In the study, referral completion was context specific and defined as children being brought at a referral facility.

Jernelle C. Miller (University of Maryland, United States of America) introduced her presentation by highlighting malaria burden and prevalence of HIV in Malawi. Miller’s study hypothesized that the use of efavirenz (EFV)-based antiretroviral drug (ART) may impair efficacy of Artemether lumefantrine (AL) for malaria treatment in adult patients in a randomized controlled trial. A 28-day therapeutic efficacy study among participants with clinical malaria confirmed by blood smear was conducted according to World Health Organization protocol. Samples were analyzed using PCR for three polymorphic genes: merozoite surface protein 1 and 2, and glutamate-rich protein; followed by gel electrophoresis and monitoring plasma lumefantrine levels. Findings showed that AL was still efficacious (above 90% threshold), but plasma lumefantrine levels were below the recommended dose (200 ng/mL) in most study participants which suggested increased treatment failure risk.

1138 - Effectiveness and safety of intermittent preventive treatment for malaria using either Dihydroartemesinin-Piperaquine or Artesunate-Amodiaquine in reducing malaria related morbidities and improving cognitive ability in school-aged children in Tanzania: a controlled randomized trial

Geofrey Makenga (National Institute for Medical Research, Tanga, Tanzania) presented a randomized clinical control trial conducted in north-eastern Tanzania. The study showcased the effectiveness and safety of Dihydroartemisinin-Piperaquine (DP) and Artesunate-Amodiaquine (ASAQ) for intermittent preventive treatment of malaria and improving cognitive ability in school-aged (10-14 years) children (IPTsc), who have become increasingly more vulnerable compared to other age groups in the highly malaria endemic study areas. The IPTsc offered safe protection against malaria parasitaemia (78%), reduced malaria prevalence (from 26% to 9%) and anaemia, increased mean haemoglobin level, and was pragmatically feasible for scale-up in school health programmes if adopted as a policy.

0140 - Spatiotemporal overlapping of dengue, chikungunya, and malaria infections in children in Kenya

Aslam Khan (Stanford University,  United States of America) highlighted the fact that malaria, chikungunya (CHIKV), and dengue (DENV) are endemic causes of fever among children in Kenya and are sustained by different mosquito vectors present in human settlements. Khan examined the spatiotemporal pattern and risk factors for exposure to malaria, CHIKV, and DENV in coastal and western Kenya. Over 5 years, the proportion of seropositive children was 9.8% for CHIKV, 5.5% for DENV and 39.1% for malaria. Hot-spots for all three diseases were identified in all sites as well as a frequent overlapping and higher seroprevalence for CHIKV and DENV in the less dense communities. The presence of litter and household overcrowding were linked to a higher risk of hot-spot occurrence; on the contrary, window screens and metal roofs were less likely to be found in hotspots. The results will be helpful to enhance surveillance activities and targeted control of these mosquito-borne diseases in Kenya.

Balotin Fogang (University of Yaounde l/Centre Pasteur Cameroon,Cameroon) started his talk by stating that less than one in twenty Plasmodium falciparum infections are symptomatic. Fogang studied the prevalence of asymptomatic malarial anaemia and its association with the appearance of clinical symptoms such as fever with Plasmodium falciparum infections in Cameroon (known as clinical conversion). Participants infected with P. falciparum were followed using a structured questionnaire over a 3 week period and mass testing using nested PCR served to diagnose peripheral malaria. Three out of four individuals sampled were asymptomatic P. falciparum positive (353 individuals sampled). Among the asymptomatic individuals, 15.4% reported having early clinical conversion before week 4 after testing, with gender and anaemic status as significant factors. High parasite density, and female gender were associated with the presence of asymptomatic malarial anemia. Asymptomatic malarial anemia was determined a key predictor of early development of febrile illness in the population. These findings highlight the need for better diagnostic tools for prompt early treatment of asymptomatic parasitaemia.

Isaac Haggai Namango (Swiss Tropical and Public Health Institute, Switzerland and 2BC Centre for Excellence in HIV/AIDS, Canada) started the talk mentioning that among the traps used to capture biting mosquitoes, the human landing catch (HLC) is considered the standard method, although safety is of most concern and its deployment is labor consuming. Namango presented his results on the efficacy of CDC light trap and human decoy trap (HDT) as alternatives to indoor and outdoor HLC in Ulanga rural Tanzania. Over two years, mosquitoes were collected as part of an exercise to evaluate the impact of indoor residual spraying (IRS) using CDC light traps, HDT and HLC. Culex spp were the most abundant mosquitoes trapped by all three traps, followed by An. funestus and An. arabiensis. HDT caught far fewer An. arabiensis, and An. funestus compared to outdoor HLC and only a third of Culex spp. The efficacy of CDC light trap and HDT to estimate Anopheles biting varied greatly depending on mosquito density. CDC light trap and HDT were shown to be not suitable as HLC surrogates in the calculation of Anopheles biting rate in this region of Tanzania but its role in malaria vector surveillance should be interpreted carefully.

Shaymaa A. Abdalal (Tulane School of Public Health and Tropical Medicine, United States) started his talk by describing the study area, the Jazan region. Jazan region is located at the border between an almost malaria-free Saudi Arabia and high-risk communities along the border with Yemen. Anopheles Arabiensis is the sole vector responsible for malaria transmission and more than two-thirds of the population is mostly farmers who live in rural areas. Abdalal conducted an unmatched case-control study aiming to identify risk factors for border malaria in the Jazan region between December 2017 to January 2019. Over 30% of participants were positive for malaria infection. Among the factors investigated, male sex, animal husbandry, travelling away from their home village within the past 30 days and attending a night spiritual gathering appeared as independent risk factors for malaria infection. These results highlight the importance of addressing social and behavioral practices within malaria elimination programs.

Aurel Holzschuh (University of Notre Dame, France) presented why malaria elimination is difficult in Zanzibar, an archipelago island with persistent malaria infections. Despite substantial reduction of P. falciparum in the last 15 years, progress towards elimination has plateaued. Aurel used high-throughput Multiplexed AmpSeq method to study the population structure and genetic differentiation within Zanzibar. Holzschuh results showed three problems illustrated below. They found that isolated populations could be targeted for elimination, that cases are in part fueled by household/village clustering and frequent travellers from mainland Tanzania facilitate Plasmodium falciparum continued transmission. 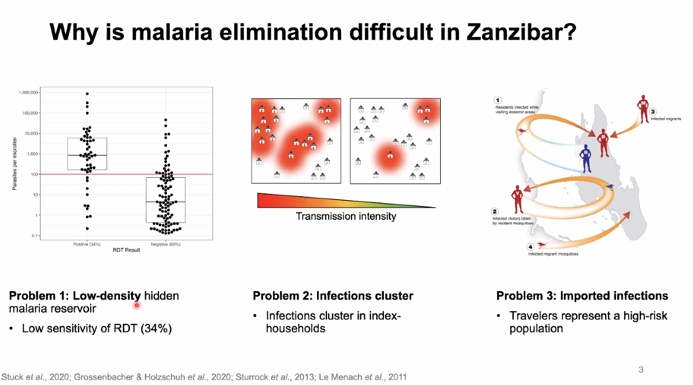 0410 - Deletions Plasmodium falciparum pfhrp2 and pfhrp3 Genes from Persons Presenting to Health Facilities in the Democratic Republic of the Congo, Ethiopia, Kenya, Madagascar and Rwanda, 2016-2018

Jessica McCaffery (Centre for Disease Control and Prevention - CDC, United States of America) examined how the deletions of Plasmodium falciparum histidine-rich proteins (pfhrp) 2 and 3 would compromise the validity of rapid diagnostic tests (RDTs) for people infected with P. falciparum. Jessica confirmed the presence of pfhrp2-deleted parasites in DRC, double pfhrp2/3 deletions in Ethiopia and newly observed and reported pfhrp2 deletions in Madagascar. The pfhrp2/3 deletions pose a threat to the validity of the HRP2/3-based RDTs which are widely used in sub-Saharan Africa to diagnose Pf malaria. Jessica aims to expand her investigations to include screening of pfhrp 2/3 gene deletions in other high malaria-burdened countries and recommends regular monitoring of pfhrp genes to ensure that RDTs are valid and reliable.

0853 - The importance of the Parasite Proteasome in Artemisinin Response

Melissa Rosenthal (University of Nebraska Medical Centre - UNMC, United States of America) looked into the effect of β2 parasite protein mutations on artemisinin-based combined therapies. The β2 mutants showed an increased sensitivity to malaria treatments (dihydroartemisinin and ozonide OZ439) in addition to increase in unfolded protein response activation and accumulation of K48-Ub (a polyubiquitin chain needed for protein degradation) in response to dihydroartemisinin. These proteins were associated with parasite death.

Deborah Stiffler (Johns Hopkins Bloomberg School of Public Health, United States of America) highlighted the bottlenecks in malaria transmission and subsequently zoned in on quantifying sporozoite transmission from vector salivary glands to vertebrate hosts.  Stiffler mentioned the difficulties of infecting mice with low sporozoite quantities which were one of the reasons why few sporozoite quantification experiments have been conducted. The next phase of this study will quantify the minimum threshold of sporozoites necessary for blood infection.

Charisse Flerida Pasaje (Massachusetts Institute of Technology, USA) presented her work that aimed to characterise and to identify the functional potential of Plasmodium falciparum acetyl-coenzyme A synthetase, an enzyme, as a novel therapeutic target for malaria treatment. The enzyme was washighly potent and capable of abating parasitic growth in red blood cells. It, therefore, has been selected for drug development.

The virtual ASTMH 70th annual meeting was introduced by Christine Petersen (ASTMH Scientific Program Chair, United States). She warmly welcomed all attendees from over 100 countries. She commended the efforts of the chair of the program, 131 scientific program committee members and the ASTMH internal team for their expertise and commitments towards the annual meeting. Afterwards, a welcome remark was presented by Tedros Adhanom Ghebreyesus (World Health Organization - WHO, Switzerland) with emphasis on the emergence of Covid-19 and its adverse effects on human lives, society and disruption of disease programs as mortality increases, while treatments of NTDs, HIV/AIDs and malaria were stalled. Tedros Adhanom further discussed the approval and recommendation of WHO for broad uptake of the RTS,S malaria vaccine in addition to existing tools to save lives of children. He affirmed that WHO is making continued efforts to collaborate with countries and partners to make up for lost opportunities and to accelerate progress towards resilient health systems across the world.

The rewards to the malaria-related talks presented during the Young Investigator Awards were given to Melissa Rosenthal under the Winners category, Aurel Holzschuc and Geofrey Makenga under the First-Tier Mentions, and Isaac Namango, Charisse Flerida Pasaje and Felicia Watson under the Honorable Mentions category. Congratulations to all of you!

This report is brought to you by the MESA Correspondents. Senior editorial support has been facilitated by the Organizers and Co-Chairs of the symposia and Divya Beri (Lindsley F. Kimball Research Institute, New York Blood Center, USA). This report is cross-posted on the MESA website and on MalariaWorld. 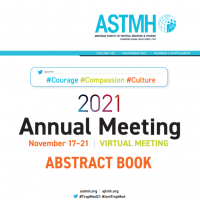