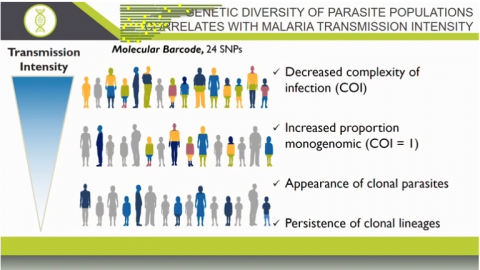 Many innovative genetic techniques developed in the past ten years are now being applied for basic research and operational and programmatic decision-making in the field of malaria. In this symposium, the audience heard how genetic signatures related to transmission dynamics, parasite connectivity, diagnostics, and drug resistance are being applied in the context of different transmission settings across Africa, Asia, and the Americas. The speakers responded to numerous questions from the audience about changes in transmission dynamics and drug resistance and the role of genetic epidemiology for malaria elimination.

Daouda Ndiaye demonstrated in-breeding and decreased parasite population diversity (complexity of infection) with intervention deployment in Senegal, and discussed the use of genetics to detect local and imported infections in very low transmission settings and to identify patterns of transmission and sources of infection. He had used genetic markers to track parasite mobility among nomadic populations in Senegal, and provided genetic evidence that these populations are not introducing malaria into low malaria burden regions. He also demonstrated ongoing drug resistance surveillance activities in Senegal as part of the President’s Malaria Initiative–Supported Antimalarial Resistance Monitoring in Africa (PARMA) Network.

Elizabeth Chizema shared results from Zambia using genetic tools to evaluate impact of Mass Drug Administration/focal Mass Drug Administration (fMDA/MDA), to test diagnostic performance, estimate true prevalence, and reveal spatial patterns of parasite connectivity. Consistent with results of Ndiaye (above), she showed a decrease in complexity of infection after MDA/fMDA deployment, and also demonstrated ongoing drug resistance surveillance. She discussed how genetics detected an enrichment of matched genotypes within households, consistent with the clustering of highly similar infections. Zambia is using molecular tools to understand transmission, with serology describing historical antigen exposure and genetics defining changes in parasite population; and to understand the relationship between infections, for better tracking of parasite connectivity.

Venkatachalam Udhayakumar presented the latest findings about emerging artemisinin resistance in Guyana where recent detection of PfKelch C580Y in a parasite background distinct from that found in the Greater Mekong Subregion (GMS) suggests independent emergence of artemisinin resistance.  Dr. Kumar discussed the emergence and spread in Peru of parasites lacking HRP2/3, including the BV1 strain that is both drug resistant and lacks HRP2/3. Use of molecular genotyping allows both detection and tracking of emerging and spreading drug resistant parasites, and affords detection of parasites that lack important loci for current rapid diagnostic testing.

Arjen Dondorp discussed the use of genetics to both identify and track the emergence and spread of drug resistant parasites in the GMS. He updated the recent finding of a dominant parasite lineage that harbors both PfKelch13 changes and Pfplasmepsin2 amplification, along with other changes of potential importance for parasite fitness. Dr. Dondorp shared the findings related to additional markers and discussed changes in the pfcrt loci that may be important for the emergence and spread of these drug resistant parasites. 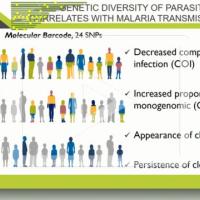 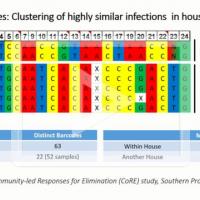 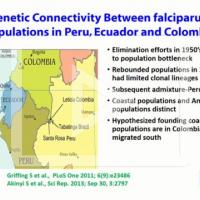 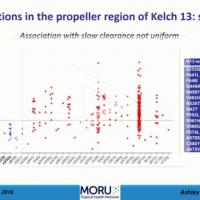