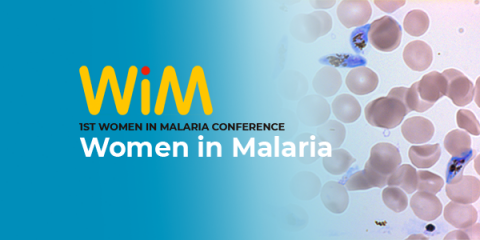 Caroline L. Ng (University of Nebraska Medical Center, USA) opened the session with a reminder that women have made unparalleled contributions to the malaria field such as Tu Youyou’s 1972 discovery of artemisinin which changed the malaria treatment landscape. The emergence of artemisinin resistance threatens worldwide progress in reducing the malaria burden. Ng’s work focuses on leveraging the roles that the proteasome plays in Plasmodium parasite development to identify novel treatments and targets. She found that P. falciparum-specific proteasome inhibitors synergize with 4 malaria treatments that activate the unfolded protein response, including dihydroartemisinin, OZ439, methylene blue, and b-AP15. This synergism results in sensitization of parasites to these compounds in the presence of proteasome inhibitors. Additionally, Ng found that mutations in the proteasome β2 subunit sensitize parasites with the resistance-conferring C580Y K13 propeller gene mutation to DHA and OZ439, suggesting a direct link between the proteasome and artemisinin resistance. These results are exciting because they offer a potential path toward overcoming drug-resistant malaria.

Eline Kattenberg (Institute of Tropical Medicine in Antwerp, Belgium) presented an efficient, cost-effective, targeted, and multiplexed next-generation sequencing assay called PfAmpliseq which can be used to characterize Plasmodium falciparum population structure, drug resistance, polymorphic antigens, and hrp2/3 deletions. The assay was specifically tailored to P. falciparum parasites in the Peruvian Amazon, where P. falciparum prevalence has recently increased, and where there has been no molecular surveillance for drug resistance since ACTs were introduced in 1999. Kattenberg applied PfAmpliseq to retrospective samples (2003-2018). She observed high genetic diversity prior to 2005, which later declined with prevalence. No validated resistance-associated K13 mutations were observed. Other markers suggested that parasites have developed resistance to sulfadoxine/pyrimethamine and chloroquine, but remain sensitive to mefloquine. She also found that the prevalence of hrp2/3 deletions has been increasing over time. Her future plans for the project is to apply the same approach to additional samples from a wider geographic area. However, the true strength of PfAmpliseq is in its modularity; other targets of interest can be easily added, and the assay can be specifically tailored to geographic regions where other resistances exist, making it a powerful tool for robust surveillance of P. falciparum drug resistance evolution and population structure.

Carlota Dobaño (Barcelona Institute for Global Health - ISGlobal, Spain) closed the session by describing the interplay between RTS,S/AS01E vaccine-induced immunity and naturally acquired IgG. She examined these relationships using protein microarrays to measure IgG reactivity to 1000 immunoreactive P. falciparum antigens (representing 763 unique genes) in serum and plasma samples from infants and children enrolled in Phase 3 clinical trial of RTS,S/AS01E. These samples were collected longitudinally from disparate sites around the African continent. In total, seroreactivity was measured in 6,695 samples, producing a rich, high-dimensional data set. Using t-stochastic neighbour embedding (t-SNE) to visualize the data, Dobaño examined IgG responses in malaria cases and controls in the unvaccinated and vaccinated groups to identify trends based on malaria transmission intensity, age, and time since vaccination. Next, she plans to apply machine learning and modeling to identify multi-antigen antibody signatures of protection common across transmission intensities and age groups.

Evelyn Olanga (University of Malawi, Malawi) started her talk by remarking that long-lasting insecticidal nets (LLINs) and indoor residual spraying (IRS) are the front line tools used in vector control. However, since 2015 progress has stalled and one of the contributing factors is insecticide resistance. This threatens the goal set for malaria-endemic countries, by the WHO, of reaching a 90% mortality reduction by 2030. Olanga further stressed the urgent need for novel tools to overcome insecticide resistance and residual transmission. To address these challenges there are a number of novel tools being explored: eave tubes with insecticide-treated nets, odor- baited traps that mimic human odor, attractive toxic sugar bait (ATSB), endectocides and Wolbachia bacteria releases that infect ovaries of Anopheles mosquitoes. Other tools being tested are dual active ingredient LLINs, spatial repellents and transfluthrin-treated materials. Overall, even after these novel tools are fully established, each country will have to develop its own vector control strategy because the heterogeneity in environments and settings across countries mean that a single solution is unlikely to be appropriate. 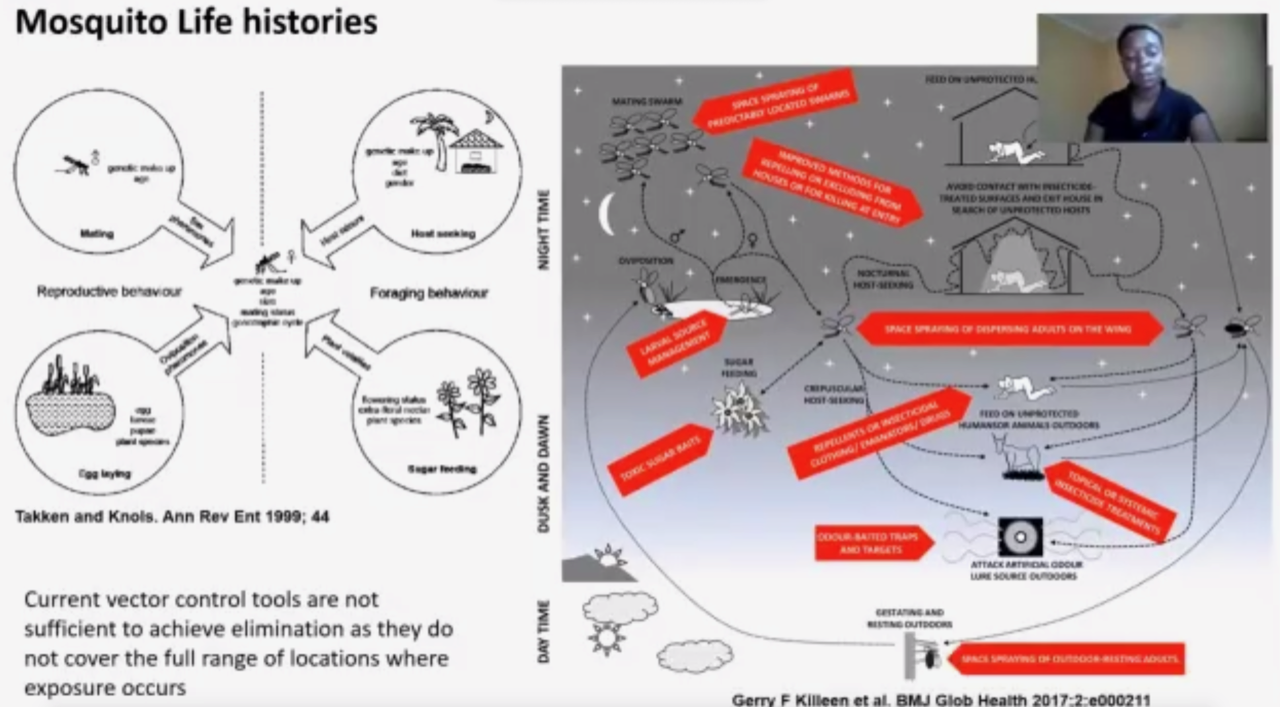 Manuela Carnaghi (University of Greenwich, UK) is working towards understanding the stimuli that drive the host-seeking behavior of mosquitoes. Due to the ever-increasing resistance to current vector control tools, novel alternative methods must be explored. The group aims to address this issue by understanding what characteristics make a target most attractive to mosquitoes. This will help develop outdoor traps as well as surveillance tools that are easy to use in the field. An important factor for such traps to work is the need to attract far-away mosquitoes. So this raises the question “What are the short-range and landing behaviors of Anopheles mosquitoes?”. Experiments to answer this question were conducted in a wind tunnel and attraction to several cues were tested. This included thermal, visual and olfactory aspects of host cues, and roles of the spatial orientation and size of the target. Their results indicated that host odor is crucial for eliciting landing behavior. Thermal cues increased landing, even if the surfaces were transparent. Carnaghi concluded that there is a complex integration of information and a synergistic integration of information  taking place that influences the behavior of the mosquitoes.

Beth Crawford Poulton (Liverpool School of Tropical Medicine - LSTM, UK) discussed the problem of growing insecticide resistance leading to the need to improve methodologies for vector-based interventions. Currently, the front-line tools against vectors are long-lasting insecticidal nets (LLINs) and indoor residual spraying (IRS) that use pyrethroids. Understanding resistance and testing new insecticides require high-throughput assays to study resistance. However, the current WHO larvicide susceptibility assay poses many disadvantages, including laborious rearing requirements, long hours, investigator bias, and low-throughput results. Poulton and her group have therefore developed a quick and unbiased assay, called the INVertebrate Automated Phenotyping Platform (INVAPP), based on an assay being used to study nematodes. It involves capturing the movement of the larvae before and after incubation with the insecticide and carrying out Paragon analysis using Python to calculate a normalized movement index. This system is thus convenient and effective for screening large compound libraries (e.g. the Medicines for Malaria Pathogen Box) and resistance profiling. Looking to the future,  Poulton aims to take this approach forward through integration into a smartphone app to improve accessibility.

Barikissou Georgia Damien (University of Abomey-Calavi, Benin) explained that the objective of her group’s project was to develop and validate an approach to evaluate the post-deployment effectiveness of malaria control in all settings. Specifically, the evaluation of post-deployment LLINs in Benin. Currently, the national policy recommends an integrated control approach involving vector control, case management, and chemoprevention. The analysis which considered all age groups, classified infections as positive or negative based on an RDT or microscopy test. In rural areas, LLINs alone gave protection against malaria and combining indoor residual spraying (IRS) further increased protection (to 50%). The study concluded that interventions alone are not enough to combat malaria, thus, there is a need for an operational evaluation of the intervention strategies.

Hilary Ranson (Liverpool School of Tropical Medicine, UK) presented research on the emergence of new insecticide resistance mechanisms in Burkina Faso. Ranson started by giving a brief background of insecticide resistance. She expressed that pyrethroids were developed in the 1970s and usage started in the 1990s. Resistance has been observed for a long time and different mechanisms have been studied since the 2000s. The different mechanisms for insecticide resistance include target-site mutations, and metabolic and behavioral resistance. Consequently, the survival of mosquitoes following pyrethroid exposure has dramatically increased over the last 10 years. Ranson presented experiments testing the impact of mosquito exposure to insecticide-treated or untreated nets in experimental huts. They found that there was no difference between treated or untreated nets and that community protection is lost due to insecticide resistance. In 2019 the ministry of health in Burkina Faso introduced next-generation nets with piperonyl butoxide and interceptor G2 in areas with very high pyrethroid resistance. Lab colonies were established from mosquitoes collected in this area and used for RNA-sequence analysis. An increase in the frequency of the new knockdown resistance (kdr) mutation, L995F haplotype, was observed in Anopheles coluzzi. In conclusion, Ranson showed that the southwest of Burkina Faso is a hotspot for pyrethroid resistance in malaria vectors, that resistance is reducing the efficacy of core intervention tools, and that resistance mechanisms vary between mosquito species. 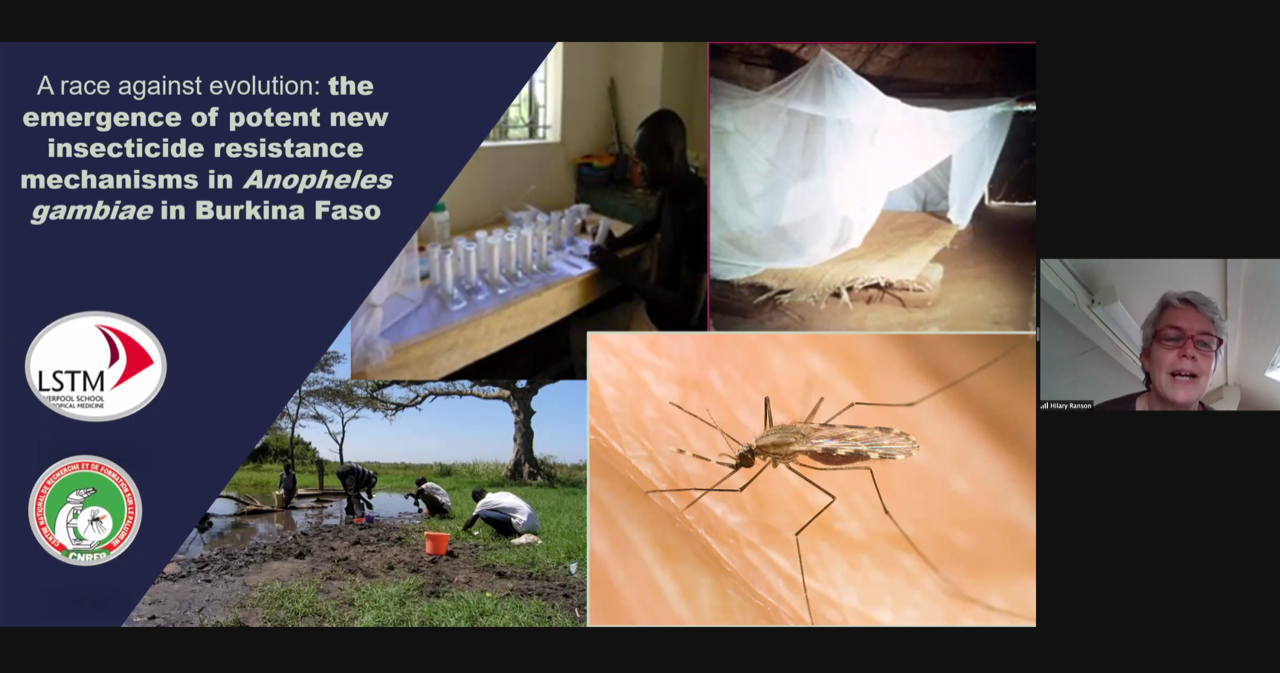 After the closing sessions, there was a virtual Poster session and to end the first Women in Malaria Conference a General assembly was arranged with the aim to shape the future of the community. The organizers closed the conference thanking everyone involved in making a reality the conference and all the attendees from all over the world. 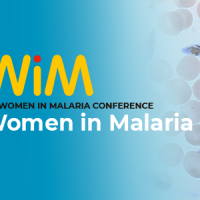