The overall goal of this project is to identify the scale of public health threat posed by P. knowlesi, through characterisation of the biological, environmental and social factors responsible for triggering its emergence within human populations.

By understanding these factors the research team will generate risk maps to define and focus appropriate control strategies. This will allow an understanding of the conditions that permit the parasite host switch from macaque to human, and predictions of the risk of further species crossover events may be possible.

Malaria is caused by a single-celled parasite found predominantly in the blood of its host, and is transmitted between hosts by the bite of a mosquito. Greater than 100 species of malaria exist, infecting many different animals. Until recently, humans were thought to be the natural hosts for 4 malaria species. However, since 2004 reports appeared of malaria infections in humans that are caused by a parasite species found previously in certain types of macaque in Southeast Asia. This species is Plasmodium knowlesi and, although benign in its natural monkey host, it has caused severe and even fatal disease in a proportion of human sufferers.

Currently, we know little about the true burden of disease caused by this macaque parasite, or why it has emerged as a human pathogen. Initial descriptions of humans with Plasmodium knowlesi malaria suggested that they had been bitten and infected while working in forested areas, common in many countries of Southeast Asia. However, a more recent study in Malaysian Borneo shows that communities there are also being infected, even though there is little forest in existence. There may be a number of factors related to the environment, the types of mosquito in the area, people’s behaviour or movement and their proximity to troops of macaques that will have an effect on how at risk they are to being infected with Plasmodium knowlesi.

This project has built a network of researchers with different skills and expertise from the UK, the Philippines, Malaysia and Australia to tackle the various knowledge gaps by working together in a concerted approach. They plan to conduct studies in both the Philippines (on Palawan island) and in Sabah, a region of Malaysian Borneo. A larger number of cases of human Plasmodium knowlesi infection have been found in Sabah, compared to Palawan, and they will attempt to find out why communities here seem at higher risk. In treating their infections they can produce guidelines to help other clinicians faced with this disease. They also want to study the macaques, the mosquitoes that transmit the parasite, and the environment in which the infections occur to give the whole picture and to produce maps that describe the risk factors existing in the different areas. The hope is that this will provide important information to ministries of health trying to control malaria disease in the affected regions and prevent further outbreaks of malaria originating from primates.

Methods: an interdisciplinary approach to examine the extent of infection with P. knowlesi at 2 study sites and to identify risk factors for infection that ultimately contribute to its control. A case-control study, the first of its kind for P. knowlesi, will allow analysis of broad-scale spatial and socio-behavioural factors associated with symptomatic infections. Alongside this, detailed entomological trapping experiments and primatology studies will be conducted within habitats of potential epidemiological importance (closed canopy primary forest, secondary forest, etc.). These data together with mosquito and macaque infection rates will be incorporated into spatial and mathematical models to generate risk maps for P. knowlesi infection. These maps will be used to define areas in which to conduct cross-sectional surveys to identify asymptomatic infections and exposure patterns with P. knowlesi. 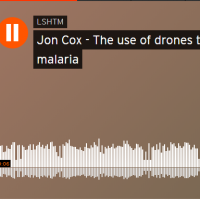 Use of drones to map the spread of malaria 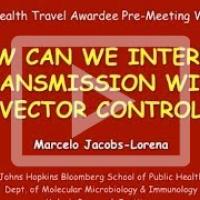 How can we interrupt malaria transmission with vector control

Transmission dynamics of residual and re-emerging malaria in the Amazon: defining a roadmap to malaria elimination