This study will evaluate the additional impact of intermittent mass screening and treatment (IMSaT) on malaria transmission and clinical malaria in an area with a moderate burden of malaria parasitemia and high coverage of ITNs and effective case management.

Once a year during the peak malaria transmission season in July, starting at baseline, the investigators selected a simple random sample of compounds within the study area for a cross-sectional survey to determine risk factors for malaria acquisition and parasite prevalence. Every person in each selected compound was consented into the cross-sectional survey. Community health volunteers (CHV) were trained to perform malaria rapid diagnostic tests, collect dried blood spots on filter papers, and provide treatment and referral recommendations for participants. Three times a year, in September, January, and April, for two years, CHVs visited every household in the intervention arm and tested and treated every consenting household member who was positive for malaria by rapid diagnostic test. Throughout the study period, malaria case counts from individuals located within the study clusters were recorded at each of the study health facilities. During the first two cross-sectional surveys we randomly selected 660 individuals to enter into an incidence cohort, 330 per arm. Cohort members were definitively treated for malaria at recruitment with artemether-lumefantrine, and were asked to visit a study health facility once a month for blood draws for malaria testing.

Every month, 18 households were randomly selected for entomological monitoring; 12 in the control arm, and 6 in the intervention arm. Pyrethrum spray catches were performed in each household. Live catches were performed one week in each month of the study. During live collection weeks, as many households were visited as possible, and prokopak aspirators were used to collect mosquitoes from the inner walls of houses. 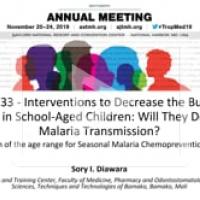 ASTMH 2019, Sory I. Diawara: "Expansion of the age range for Seasonal Malaria Chemoprevention in Mali" 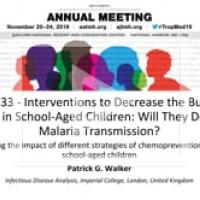