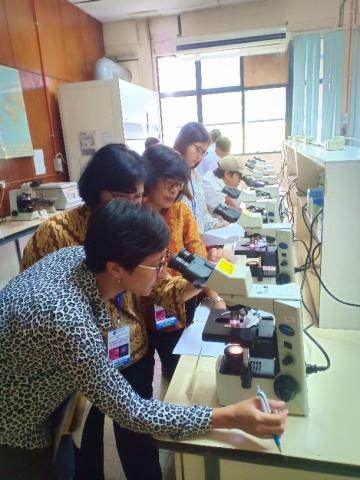 The Opening Ceremony of this workshop was presided over by Prof Dr Indra Vythilingam, the Chairman of the workshop, and officiated by Prof Dr Ng Chirk Jenn, the Deputy Dean of Research, Faculty of Medicine, University of Malaya. This workshop was attended by 20 delegates from eight countries, namely Bangladesh, Cambodia, China, Indonesia, Malaysia, Philippines, Singapore and Thailand.

A morning session led by Prof Dr Fong Mun Yik, introduced the history of P. knowlesi. Plasmodium knowlesi was discovered in 1927 in its natural simian host, the long-tailed macaque Macaca fascicularis. This primate malaria parasite is commonly found in Southeast Asia and the first case of human infection of this species was reported in 1965 in Malaysia. In addition to P. falciparum, P. vivax, P. malariae and P. ovale, P. knowlesi is now recognized as the fifth species of Plasmodium causing malaria in humans. From time to time, variants and/or strains, or subspecies of P. knowlesi have been isolated, but unfortunately, the typical P. knowlesi is no longer available for comparative studies. Historically, P. knowlesi was used for the treatment of neurosyphilis, however, the infection became so virulent that it had to be terminated with drugs. Dr Fong Mun Yik also pointed out that the morphological similarities between P. knowlesi and P. malariae necessitate the use of molecular methods for a correct identification. 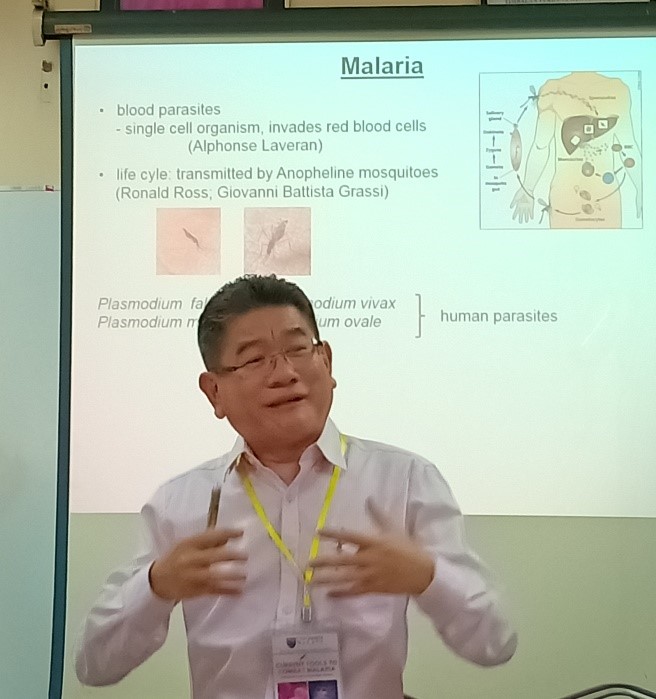 Dr Fong Mun Yik giving his talk on the history of P. knowlesi

The public health importance of knowlesi malaria was also lectured by Dr Fong Mun Yik in session 2. The transmission of knowlesi malaria in Southeast Asia has been often associated with the natural distribution of mosquitoes of the Anopheles leucosphyrus group and the long-tailed macaques. In Southeast Asia, knowlesi malaria is of particular importance in Malaysia, where an increasing trend in the number of cases has been seen. Deforestation and associated environmental changes are the key drivers in P. knowlesi transmission. Human behavioural factors with P. knowlesi could be targeted in future public health interventions. Dr Fong Mun Yik emphasized that early diagnosis of P. knowlesi infection is crucial because the severity is related to its short erythrocytic cycle of 24 hours which may rapidly lead to hyper-parasitaemia. Species diagnosis on admission microscopy was incorrect in 90% of the cases, including 69% misdiagnosed as P. malariae, 14% as P. falciparum, and 7% as P. vivax. To combat this disease, strategies to improve healthcare access in endemic areas; availability of appropriate antimalarials at all facilities; and accurate, sensitive and specific rapid diagnostic tests are the key elements to be taken into consideration. Following the WHO guidelines for malaria elimination strategies, the (1) understanding of parasites, (2) laboratory diagnosis, (3) entomology, and (4) clinical management are the research priorities that should be focused on.

Led by Prof. Dr Rohela Mahmud and Dr Amirah Amir, this session trained the participants on the microscopic identification of the five human malaria species. When malaria is suspected, it must always be confirmed by laboratory diagnosis. However, diagnosis can be difficult when parasitaemia is low and only certain stages such as early trophozoite are present. Notably, P. knowlesi shares several morphological characteristics with P. falciparum and P. malariae which makes an accurate diagnosis by microscopy virtually impossible. Giemsa stained thin and thick blood films remain the standard diagnostic approaches, and each of the five major parasite species has distinguishing characteristics. In this session, the different stages of malaria in red blood cells such as ring, trophozoite, schizont and gametocyte, and their respective morphological characteristics, were demonstrated. 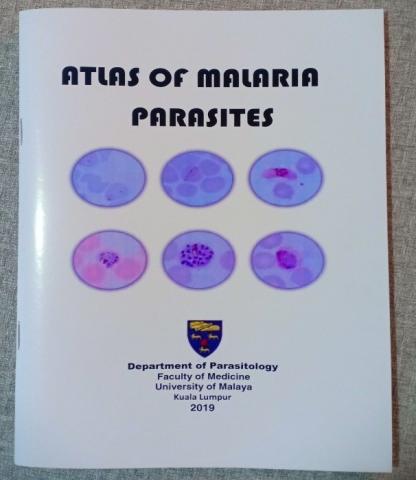 Atlas of malaria parasites published by the Department of Parasitology, Faculty of Medicine, University of Malaya in 2019

Also led by Dr Rohela Mahmud and Dr Amirah Amir, this session allowed the participants to identify 20 thin blood films under light microscopes. Different species and stages of malaria parasites were provided in the slides, and the participants were required to identify them accordingly. Several morphological characteristics such as the size of red blood cells (enlarged red blood cells), the presence of double chromatin, observation of multiple infection in a single cell, shapes of the trophozoites, number of merozoites in schizont, and shape of gametocytes are the important keys for species identification. 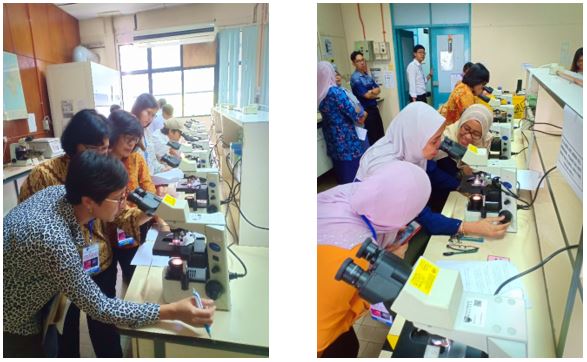 This session was led by Prof Dr Indra Vythilingam who shared her knowledge on the mosquito vectors of P. knowlesi in Malaysia. In the 1960s, several species of mosquitoes such as An. hackeri, An. latens, An. introlatus and An. cracens were identified as the vectors of P. knowlesi. Following the continued efforts to identify the vectors, An. dirus and An. balabacensis were incriminated as the vectors of P. knowlesi in 2011 and 2015, respectively. Nevertheless, more efforts are yet to be conducted in the identification of other vectors responsible for transmission of the disease in the Southeast Asian region. Changes in the ecological landscape such as deforestation are an important factor responsible for malaria transmission. It has been shown that deforestation coupled with the reduction of malaria cases has led to the emergence of P. knowlesi. Dr Vythilingam concluded that strong collaboration among researchers from different parts of the world is warranted to combat this zoonotic malaria which is now occurring in all countries in Southeast Asia, except Timor Leste. 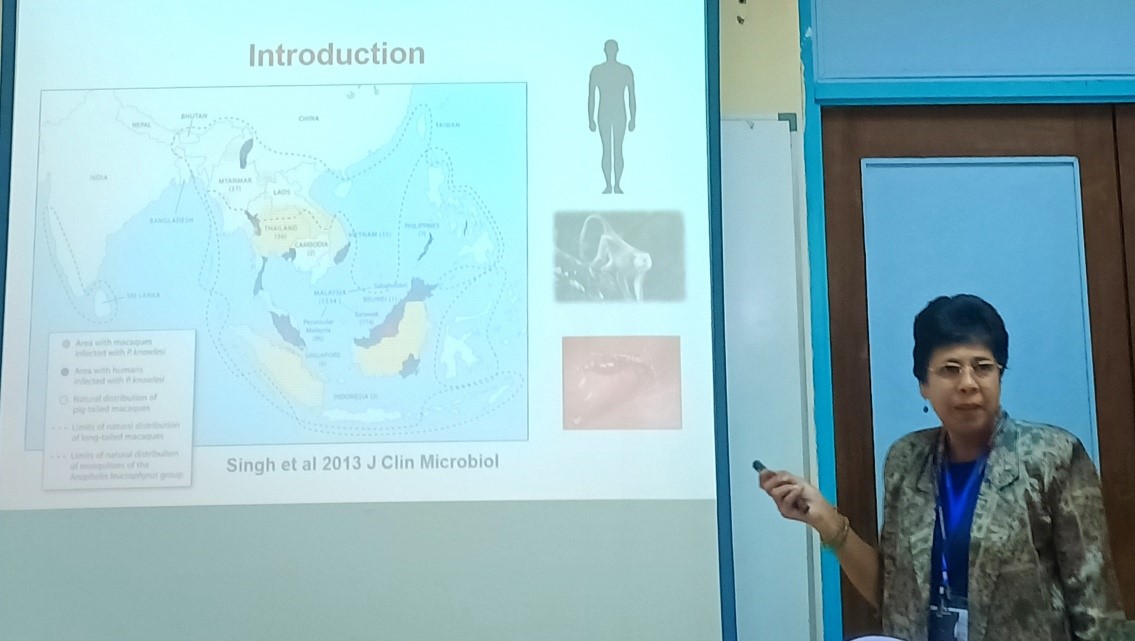 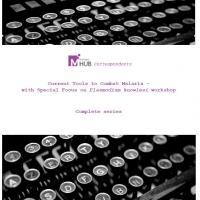