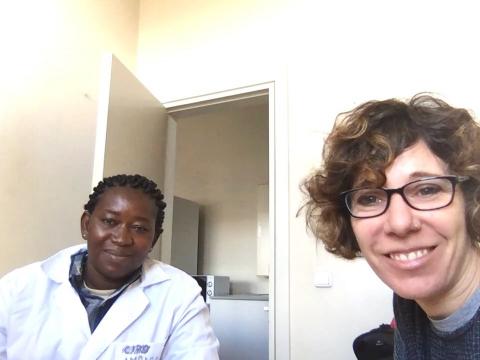 “Le Futur est Rose”- The Future is Pink: Disrupting gender bias in malaria science, a conversation with Elena Gómez-Díaz and Awa Gnémé from the “Women In Malaria Initiative".

Meet the women who are changing the gender narrative in malaria science. During a thought-provoking conversation between MESA and the “Women In Malaria Initiative” (WiM) we take a closer look at the current realities of women working in malaria science.

MESA had the opportunity to talk to co-founder Elena Gómez-Díaz (Spain) and visiting scientist Awa Gnémé (Burkina Faso) of WiM. They shared with us their motivations to be part of the WiM initiative and their hopes to effect change in the field of malaria. WiM is a global community of women working across a variety of areas in malaria science including immunology, mathematical modelling, public health and epidemiology among others.

In June 2018, UNESCO released its latest data from its research and experimental development on the gender gap in science. Titled Women in Science, the document by UNESCO's Institute for Statistics (UIS) illustrates the distribution of female researchers employed by percentage per country and region. The report concluded that ‘overall, women account for a minority of the world’s researchers’ (UIS 2018).

Driven by this observation of a lack of women represented across the field, Elena Gómez-Díaz and Joanne Power launched the Women In Malaria Initiative in 2018. A global database made up of female research scientists with a range of specialities in malaria as well as space where career mentorship and support is shared among the women.

Find out about what was discussed in the conversation below.

Q. Could you tell us about who you are and what you do?

Elena: I am a Principal Investigator in Granada, Spain. I am a Ramón y Cajal tenured researcher, and my group works on the epigenomics of malaria with a focus on the mosquito life cycle. I recently got a fixed “Distinguished Researcher” position at the Spanish National Research Council (CSIC). Specifically, my work combines state-of-the-art epigenomics and transcriptomics technologies applied to parasite isolates and mosquitoes from the field, mimicking the natural conditions of transmission in malaria endemic settings.

I'm very engaged in dissemination activities and promoting women in science, technology, engineering, and mathematics (STEM). A year ago we started this initiative about women in malaria with the idea of growing a community of women who are working on the field. It is true that we are numerous – the problem is when you look at how represented are these women in different career steps. An aim of the WIM community is to break the under-representation through giving visibility and in the future build tools and resources for better community support and mentoring.

Awa: I’m Awa Gnémé from the University Joseph Ki-Zerbo (former University of Ouagadougou) in Burkina Faso where I work as a researcher and lecturer. I am biologist working in the area of malaria vector parasite interactions, looking at the transmission of different parasite and diseases from mosquitos. I am here in Granada on a research visit with Elena for capacity building.

Q. What is the current number of researchers in WiM’s database, and what has the journey looked like so far?

Elena: We currently have 350 women on our database. Several similar initiatives were already taking place for example when we started e.g. “500 women scientist” and the “women in parasitology”. Also at the time, here in Spain for local women, equality commissions were being built and were growing.

Whilst in Glasgow for a research stay when I met Joanne Power. She is too highly involved in these types of activities. We discussed creating something similar, a database to provide a list of women working in different areas as a resource. Moving on we contacted the BioMalPar conference organisers, who offered us a spot for a workshop, and it has been like that since.

The key to the success of WiM is that people were already conscious of the problem! Even though women are very numerous in the malaria field, we are all very aware of this under-representation problem. There is a workforce but there is also a very clear aim, so I think that that has helped us to move forward.

“The bias is dependent on the awareness and whole consciousness of the person organising the conference, so we still see a lot conferences that are dominated by male speakers!” Elena

Q. You mentioned that many women make up the malaria workforce, is this not representation? Could you explain the significance of the under-representation you refer to at the different levels of science careers?

Collectively these small things cause us not to be a reference for many people. It is visible when you look at the number of women doing the PhD then you go to the Post-Doc then you go to the PI's and then you go to the full professors and PI leaders then you see clearly the under-representation. The point is that above that, there are many different and specific areas in our work where we are even less visible and less represented.

Things are starting to change; I think the more and more there is an awareness about this and now for example in conferences, there is an explicit action towards putting an equal number of male to female keynote speakers. The bias is dependent on the awareness and whole consciousness of the person organising the conference. We still see lot conferences that are dominated by male speakers. When you participate less, you are also less confident and you have less practice too. The only way to break this cycle is to consciously include women in this agenda. Positive discrimination is needed so we can be in the system and normalise the number of women participating in these activities. Once we have equal access then we can put things in a balance again.

Q. How do WIM design their mentorship programme to ensure women are supported and prepared when and if opportunities do arise?

Elena: We have a slack workspace forum where more than 100 WIM members have signed up and regularly engage with each other and exchange ideas. We are present in 34 countries across 4 continents: Africa, Asia, America and Europe, but we still want to increase the visibility because we still have a lot of gaps, so that is the first goal.

One of the goals is to be present at the main malaria conferences so we can bring awareness to the need and the initiative. In terms of training and resources, our platform provides job offers and opportunities that are available and accessible to the community. We are thinking about providing an advisory service for women who need help with papers and grant writing too.

Q. WIM tackle gender imbalances in science. You mentioned you have 34 countries in the network, how important is it for WiM to represent a range of nationalities and countries also?

Elena: Well actually, the problem is that countries were we have more WiM representatives, are those least biased in discrimination against women. In regions such as Africa, South America or Asia, malaria is a real problem, the women there are more discriminated against and suffer the most bias, and they are the least represented. Additionally, it's linked to how accessible science is for women. I think that the channels we are using now are not enough and the next step would be to reach them in a local context- contacting directly the centres, the universities, contacting all the people that we know are working there and try to fill the geographical gaps in our WiM map.

Q. Awa could you share your experience as a researcher in a malaria endemic country? What would you say is one of the biggest challenges about research taking place on the ground in Africa?

Awa: In research to become a model developer in our area in Africa, you have to work hard as a woman. Women have a lot of responsibilities in their family, and having enough time to work in the lab or in the field is not easy sometimes. In addition,  being a scientist supposes a dedication for learning and there are not enough opportunities for women. When it comes to competing it can also be a struggle because it can make mothers vulnerable in the progress.

The first difficulty of being a researcher is about having access to education as a girl or woman, at least in Burkina Faso. Access to higher-level education (university) is difficult for women. Most women are expected to get married and as a result, most families do not see education as a good investment for girls, parents would rather invest their resources in boys.

The second challenge is, if you do gain access to higher-level education, then the access to grants and funding can be difficult. Proportionately, there are more men than women at universities yet the grants are the same for both. This makes it difficult for women to compete for the funds as they are considered a minority and are regarded as less than men. Related to this is the economic context of the country where funding for research is very little in the first instance.

Thirdly, in science, you need to travel and move around. For women, they have families and responsibilities, which make it hard to move. Researchers in endemic regions are somewhat isolated from the external world in terms of the scientific community and scientific advances. Most end up moving abroad to become exposed to the scientific environments that have the means to move the malaria field forward.

Q. What would you say is the most positive thing about being a scientific researcher in Burkina Faso and what motivates you to do this job?

Awa: In Burkina malaria is present. Women take care of most of the family when they are sick. Malaria affects women the most and for this, I am interested in understanding what malaria is and what is its process. I love to learn about this process and become knowledgeable so I can explain the importance to the family and to those who are unaware of this knowledge.

Elena: Well from my side I think I would love to see the idea that all women have equal access and equally enjoy science. If you are passionate about science and it is a dream of yours to pursue it then that should become reality for whoever really wants it!

Awa: 'Le Futur est rose'- The future is pink. Many people are starting to realise the importance of women working in science. Not only in malaria but also in research as a whole. I think in Africa they are starting to understand this importance maybe before they did not, but now they are. It is important to show girls that science can also be for them.

MESA thanks Awa and Elena for their participation in this interview.

For more information on the latest work of "Women In Malaria" find them online.