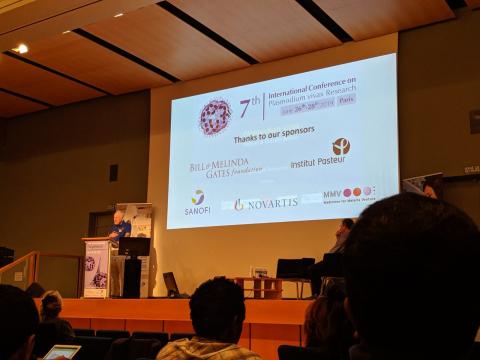 Setting the stage for the 7th International Conference on Plasmodium vivax research were a series of experienced speakers. Chetan Chitnis (Institut Pasteur, France), the panel chair, reminded the group of the current global status of Pv, including the impressive reductions in burden at the beginning of the 21st century, as well as the limits that have been reached through use of standard control measures. He recognized the research contributions of Dr Louis Miller (NIAID, NIH, United States), who then reminded the group of the major breakthroughs and remaining challenges of P. vivax research. The crucial challenges he identified were the need to develop drugs for the hypnozoite stage of P. vivax and the ability to culture P. vivax, which could lead to significant developments in the understanding of the parasite.

George Snounou (French National Center for Scientific Research, CNRS, France), took us on a journey through malaria history, exploring many key discoveries since the 1800s. A particularly fascinating look at experimental malariology revealed the richness of this data source, including 13000 reports between 1917 and 1945 of malaria therapy inoculations with P. vivax around the world. He presented a philosophy to “be ignorant and be imaginative” in scientific inquiry, giving examples of dogmas that remained long unchallenged before being ultimately disproved. He identified some examples of current “wobbly dogmas”, including that P. vivax is the ‘benign’ malaria, that P. vivax cannot infect Duffy negative individuals and the possibility of sequestration and cryptic cycles.

We were treated to a comprehensive overview of the biology of P. vivax by Wai-Hong Tham (Walter and Eliza Hall Institute, Australia). She highlighted research and tools that have or will greatly contribute to our understanding of P. vivax biology, such as the use of drug screens to investigate new treatments for hypnozoites that utilise tiny technologies and 3D cultures. She also talked about molecular insights into parasite invasion of reticulocytes and the use of biomarkers for hypnozoites being key to the future of surveillance methods. Finally, she spoke about the need for a vivax model due to its inability to culture, current available options include using a similar Plasmodium species with orthologues, chimeric humanized mouse models or carrying out controlled human infection trials.

In the session on the Epidemiology of Plasmodium vivax malaria burden, a wide range of topics were covered, however, there were a few recurring topics that were emphasised. One was the use of primaquine at high dose as a universal cure. Ric Price (Menzies School of Health Research and Charles Darwin University, Australia, and University of Oxford, United Kingdom) highlighted evidence that indicated that higher dose primaquine dramatically reduces the risk of recurrent infections. Moreover, Ric highlighted that the majority of P. vivax is in children and in remote areas and emphasised the importance of targeting these vulnerable populations and ensuring treatment reaches them. Ric also discussed the importance of ensuring that interventions and policy are context-specific, which made it especially valuable to hear specific studies carried out in the Pacific and South America. Dionicia Gamboa (Universidad Peruana Cayetano Heredia, Peru) discussed the strides that are being made in malaria burden reduction in South America. In particular, they found that there are many socio-demographic and ecological factors that determine spatial heterogeneity and lead to localised regions of malaria across Peru. She presented an overview of the Malaria Plan Zero, a more realistic long-term malaria elimination plan that is being supported by the government in Peru. Leanne Robinson (Walter and Eliza Hall Institute, Australia) offered insight on the P. vivax situation in Papua New Guinea. She emphasised that in their study they found a different rate of vivax reinfection to a previous study, illustrating the heterogeneity throughout the country and region. Moreover, she spoke about how after intervention implementation the reduction in vivax was much slower than that of falciparum.

Katherine Battle (Malaria Atlas Project, University of Oxford, United Kingdom) presented her novel maps on global P. vivax burden. She spoke about the shift from using prevalence surveys to routine case surveillance and how this is a particular challenge in Africa because of limited data. The importance of these changing trends was emphasised, this may be particularly important given the frequently reported rise in proportion of vivax cases as transmission declines.

Aimee Taylor (Harvard T.H. Chan School of Public Health, United States) examined the cause of Pv recurrence by examining 3-9 highly polymorphic microsatellites, which were fed into a novel population statistical model to estimate the time to recurrence and genetic relatedness. She found that her model could reliably distinguish relapse from reinfection. Overall, she found that population supervised high dose primaquine could avert 99% of relapses​.

John Henry (Institute for Health Metrics and Evaluation, United States) described an analysis of malaria therapy records, which observed a relationship in logged mean and variance of asexual parasite densities consistent with Taylor’s law and showed correlation between increased parasite density higher fraction of fevers. Both Pf and Pv displayed these general characteristics, however, the periodicity of the parasite densities differed between species.

The Turbo Talks highlighted unique epidemiological characteristics of P. vivax in diverse geographic settings. In the Mancio Lima area of Brazil, haplotype analysis presented by Thais De Oliveira (University of Sao Paulo, Brazil) showed that infections were mainly due to local transmission, rather than introduced cases. Mirco Sandfort (Institut Pasteur and Sorbonne University, France) showed two cross-sectional surveys that examined the burden of malaria near forest regions of Cambodia. Inge Sutanto (University of Indonesia, Indonesia) presented a multi-center study bringing worrying news that close to 40% recurrence of P. vivax was not prevented by high dose primaquine treatment. Finally, a novel finding was brought to the forefront by Kate Twohig (Malaria Atlas Project, United Kingdom) as she discussed evidence for the presence of P. vivax in 29 African countries, with 9 of these countries showing evidence of infection in Duffy negative individuals.

The results presented by Ingrid Felger (Swiss Tropical and Public Health Institute, Switzerland) demonstrated the power of ultra-sensitive qPCR methods using multiple copies of mitochondrial 18S region over standard low copy qPCR. She found that the ultra-sensitive qPCR was far more sensitive than the standard practice for asymptomatic infections. Moreover, she found that using finger prick blood samples instead of venous blood samples for the ultra-sensitive qPCR captured the majority of sub-microscopic infections, including 91% gametocyte carriage. Importantly, this meant that all infections with high enough parasitemia to be transmissible were identified.

Matthias Marti (University of Glasgow, United Kingdom) explored the conundrum of severe Pv infection with low observed peripheral blood parasitemia and the hypothesis of an additional parasite reservoir contributing to this clinical presentation. Through amplification of markers of different stages of parasite development, he found evidence to support extravascular sequestering and parasite maturation in the bone marrow.

Amelie Vanteaux’s (Institut Pasteur, Cambodia) presentation examined malaria epidemiology with a vector focus in Cambodia. Following a large mosquito collection, 20% of the mosquitoes were captured from 6am to 6pm, suggesting that vector control tools that protect only at night (such as insecticide-treated nets) may be less effective. Another interesting finding was that more infectious mosquitoes were collected in the forest compared to other sites (3.2% and 1.9% respectively).

Transmission-blocking vaccines remain a high priority research item on the malaria control agenda. Arianna Marini (University of Oxford, United Kingdom) presented an investigation to improve the immunogenicity of a key vaccine candidate, Pvs25, with the Plug-and-Display technology using virus-like particles. This platform was further improved through the Matrix-M adjuvant and similar candidate products are being prepared for Phase 1 clinical trials.

One of the highlights of the talks on day one was undoubtedly the presentation by Steven Kho (Menzies School of Health Research, Australia), who examined the evidence for a hidden P. vivax biomass in the spleen. He convincingly described evidence from splenectomies that showed that 95% of the individuals tested (n = 21) had asymptomatic Plasmodium infection, seven infections were vivax, 13 were falciparum and 1 was a mixed infection. They found more asexual stages in the spleen than in the peripheral blood, predominantly in the P. vivax cases, and that there were increased immature reticulocytes in these spleens which could evidence that it may be a site for parasite development. This presentation thus seems to break the dogma that the unique function of the spleen in malaria is the destruction of infected red blood cells.

The first Turbo Talks from the second session transported the audience from Brazil to Myanmar: Ana Paula Duarte (State University of Amazonas-UEA and Tropical Medicine Foundation Dr Heitor Vieira Dourado, Brazil) described the inhibition of P. vivax infection in Anopheles aquasalis through silencing of JNK and Toll immune pathways, providing improved understanding of this dominant vector in the Brazilian Amazon area. She was followed by Victor Chameau (Shoklo Malaria Research Unit, Mahidol-Oxford Tropical Medicine Research Unit, Mahidol University, Thailand and University of Oxford, United Kingdom), who presented on the impact of mass drug administration on the entomological inoculation rate and showed that the entomological inoculation rate was reduced by 12.5 fold. However, the reservoir of vivax was reconstituted within 3 months, presumably due to relapses.

We have had a great first day at the 7th International Conference on Plasmodium vivax Research. Looking forward to hearing more tomorrow!

This report is brought to you by the MESA Correspondents Emma Collins and Kate Twohig (University of Oxford) with mentoring and editorial support from Hernando del Portillo (Barcelona Institute for Global Health (ISGlobal) & Institut d’Investigació Germans Trias i Pujol (IGTP)). It is cross-posted on the MESA Website and Malaria World. 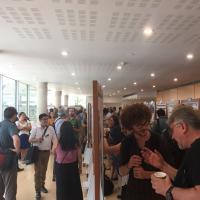 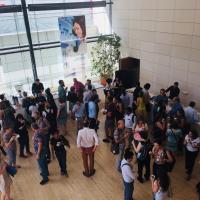