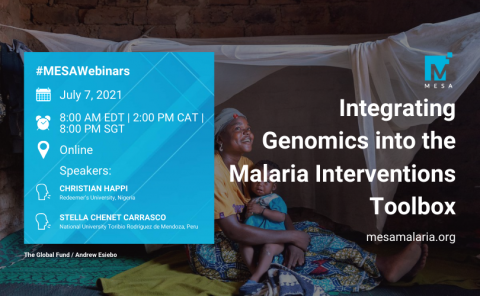 Kate Whitfield, the MESA Coordinator, welcomed everyone to the third session of the MESA Webinars: Science for Malaria Impact, a series of webinars dedicated to showcase cutting-edge research from malaria-endemic country scientists. While waiting for all the attendees to join, she introduced the moderator of the session, Deus Ishengoma, from the National Institute for Medical Research, Tanzania.

Christian Happi (African Center of Excellence for Genomics of Infectious Diseases, in Redeemer’s University, Nigeria) kicked off the session by introducing the African Center of Excellence for Genomics of Infectious Diseases (ACEGID), an African platform for pathogen genomics that aims to create an academic and research environment that transcends national boundaries and ensures the conduct of relevant, responsive, ethical and high-quality translational genomics-based research in Africa. To develop African research capacity in genomics, it focuses on training and education, empowerment and capacity building, research, and community-engagement. For instance, given that fever is a common denominator of all infectious diseases, there’s an ACEGID’s program that aims to characterize fevers of unknown origin through microbial metagenomics. Back in 2014, researchers trained at ACEGID conducted the first large-scale genome sequence-based analysis of the circulating Ebola viral population, pioneering open data sharing and access in the context of the Ebola outbreak. This was essential to characterize mutations, identify sustained human-to-human transmission, monitor the introduction of newly imported viral diversity from other countries, or track the evolution of the epidemic, among others. This local, real-time genomic response has been used to react against Lassa Fever and Yellow Fever surges in Nigeria and more recently, to respond to the COVID-19 pandemic. In all these examples, genomic data was key to address key public health questions and challenges. ACEGID is also responsible for the molecular characterization of the malaria parasite population structure and diversity, as well as drug resistance characterization in the parasite population from all parts of the country. The data generated inform policies and help measure the effectiveness of the currently employed control strategies in the country. Some of their findings suggest that parasite genetic diversity and transmission in the country are still high, but the parasite population substructure is low. In terms of drug resistance, key findings show that over 50% of parasites are still chloroquine resistant, impeding the re-introduction of the drug in the country. On the other hand, despite the occurrence of mutations, artemisinin-based combination therapies (ACTs) and the drug combination sulfadoxine-pyrimethamine are still efficacious, supporting its continued use. Finally, Prof Happi highlighted the emergence of P. vivax populations in Nigeria.

A Molecular Response Network to Support Malaria Elimination in Peru

Stella Chenet (National University Toribio Rodríguez de Mendoza - UNTRM, Peru) kicked off the talk emphasising the importance of building capacity and training students on infectious and neglected diseases in areas such as Loreto and the Amazonas, the two regions with the highest numbers of malaria cases in the country. Even though the number of Plasmodium cases has reduced over the past years, Peru still has one of the highest numbers of cases in South America, being mainly due to P. vivax. Reduction hasn't been equitable across the country and actually, control measures haven’t been very successful in the Amazonas. In this area, there was a P. falciparum outbreak between 2018 and the beginning of 2020 after 13 years without P. falciparum cases, worsened by the fact that native communities living in the area along the river have no basic services, contributing to the emergence of endemic diseases. To fight the outbreak, Chenet’s research group got familiar with the area and the community, mapped the health posts available and then introduced molecular diagnosis since they had relied exclusively on microscopy for the past years. Molecular diagnosis showed the appearance of autochthonous cases which were really important to report, track and identify their origin, being Loreto or Ecuador. The group found that the majority of these cases had very low parasitemia, which could have been undetected by microscopic techniques in the past. Chenet project's main objective is to build a Malaria Response Network which includes a Malaria Genomics Platform, where academia and research centers with capacities for molecular diagnosis work together with regional laboratories to share information and transfer protocols so data can be compared, contributing to decision making and responding to disease accordingly. Local and regional government support to maintain the Network in the long term is necessary to avoid resurgence of malaria, as seen in the past once a project finishes. The key aspect of the Network is to build a consistent malaria molecular surveillance platform to detect drug resistance markers and population genetic markers. A digital platform will be built for data sharing and technologies will be transferred as well as building capacity within the region. Chenet pointed out several applications of this type of data, such as 1) identifying local transmission, 2) reconstruction of transmission chains, 3) detecting drug resistance, 4) detecting co-infections, 5) outbreak investigation and 6) population genetics and bottleneck effect. To finish the talk she mentioned another application of genomic data, to design point of care tests (POCTs) that can detect different types of parasites, differentiate among species and identify particular mutations circulating in the area.

Deus Ishengoma and Kate Whitfield thanked the speakers for their wonderful talks and discussion, the attendees for the questions and the MESA team behind the scene for coordinating the webinar. Whitfield expressed her gratitude to the moderator and announced the next webinar planned for September.

This report is brought to you by the MESA Team. 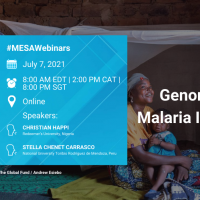 Trial to Evaluate the Safety, Immunogenicity and Protective Efficacy of Three or Five Administrations of GAP3KO Sporozoites