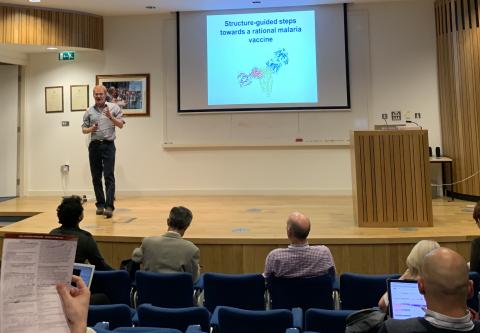 MESA Correspondents bring you cutting-edge coverage from the 5th International Conference on Malaria Vaccines for the World (MVW).

Sheetij Dutta (Walter Reed Army Institute of Research) opened the day with a presentation on studies determining in vitro and in vivo correlates of circumsporozoite protein (CSP) based immunotherapeutics. He defended that vaccines able to induce polyclonal responses that recapitulate the activity of monoclonal antibodies (mAbs) may be more cost-effective than deploying mAbs.

Ayman Khattab (University of Helsinki) presented how the N-terminal region of CSP may mediate immune evasion by hijacking the complement inhibitor protein complex C4bp. The N-terminal seems to provide a crucial function to the sporozoite and it is immunogenic, which points to a possible target to improve the RTS,S vaccine.

Daniel Jenkin (University of Oxford) followed on the vectored vaccines explaining a first-in-human challenge trial of prime-target immunization with liver-stage vaccine candidates ChAd63 and MVA ME-TRAP. Prime-target is a novel approach that induces immune memory and antigen specific lymphocytes in the liver, and it is mainly safe, despite some reactogenicity.

Denise L. Doolan (James Cook University) closed this session with a presentation on systems-based approaches to define effective targets for interventions against malaria. She identified new immunoreactive antigens using a proteome-wide T-cell screening approach that can be used for T-cell target vaccine discovery, as well as antigens giving cross-species protective immunity. Machine learning approaches are also being applied to identify antigen signatures that can predict resistance or susceptibility to malaria.

Mary Hamel (WHO, Geneva) led the special PATH/WHO session on the phased introduction and evaluation of the RTS,S/AS01 vaccine in children in Ghana and Malawi starting this past April, 2019, followed later by Kenya. This initial rollout of the vaccine has been approved by the governments of the participating countries. The 5-17 month old age group will be the focus with a dosing regimen at months 5, 6, and 7 in Malawi, at months 6, 7, and 9 in Ghana and Kenya, and all with a booster dose at 24 months. She discussed the value and impact of RTS,S/AS01 that has the potential to strengthen efforts to control malaria. Mary Hamel (speaking for Temwa Mzengeza, Ghana Health Service) reviewed the malaria burden in Malawi and the milestones of the Malaria Vaccine Implementation Programme (MVIP) where approximately 120,000 children per year will have the opportunity to receive RTS,S. The pilot will be accompanied by monitoring and evaluation by independent partners to determine the public health role of the vaccine. Patricia Njuguna (WHO) presented the procedures for the evaluation of feasibility, safety, and impact of RTS,S in the pilot implementation studies. The first data are expected to be available 24 months after the pilots have started. Nekoya Otsyula (GSK Vaccines) presented an overview and the objectives of the evaluation component of MVIP by GSK and the requirements to allow for a broader use of the vaccine. She stressed that it is key to take timely decisions for long-term planning and avoid supply chain gaps. Margaret Gyapong (University of Health and Allied Science, Ghana) presented the need for monitoring within each country during the pilot period and gave specific examples from Ghana. She covered qualitative methods to evaluate vaccine pilot participation such as household surveys, and implementing “photovoice scenarios” where the primary caregiver takes pictures to reflect what the experience is like for them when the child receives the vaccine. Compliance of the full vaccination regimen and the underlying reasons will also be assessed. Finally, Mary Hamel (WHO, Geneva) wrapped up the session by reminding the audience that RTS,S is the first malaria vaccine going into use and that other candidates in the pipeline are needed to obtain improved vaccines. The lesson learned from an epidemiological perspective from the pilot implementation studies will also be beneficial for future vaccines.

Carlota Dobaño (ISGlobal, Barcelona Institute for Global Health) discussed qualitative aspects of antibody responses to malaria vaccines after primary and booster vaccination. She showed that the C-terminus of CSP is a target of immunity to RTS,S vaccine and that IgG avidity to this domain contributes to vaccine-induced protection. She emphasized the importance of the folding and glycosylation of the antigens, as well as measuring the subclass profile of IgG responses to identify correlates of protection. She also showed that RTS,S vaccination has an impact on vaccine-unrelated malarial antigens, which may affect the acquisition of natural immunity, vaccine efficacy and duration of protection.

Amy Flaxman (University of Oxford) continued on the theme of T cell immunogenicity in prime-target immunization with liver-stage malaria vaccines. She showed that the two dose heterologous prime-target enhances the immunogenicity and efficacy compared to two dose intramuscular prime-boost or three dose regime. This enhanced immunogenicity can be detected in the periphery and it is observed in the CD8+ T cell population.

Adrian Hill (on the behalf of Katie Ewer, University of Oxford) presented on the characterization of the antibody response to vaccination with R21/Matrix M. R21/MM was shown to elicit more potent and durable antibody responses at lower doses and associated with the induction of different Tfh cell populations, as well as higher memory B cell frequencies.

Following on the previous session theme, David Pulido-Gomez (University of Oxford) discussed the characterization of antimalarial mAbs revealing synergistic epitopes in the P. falciparum Rh5-CyRPA-Ripr invasion complex. He covered the R5CyRP invasion complex mAb panel and stated that Class I mAbs able to bind to the R5CyRP complex can be GIA positive, whereas Class II mAbs do not commonly show GIA activity. Next, Matthew Higgins (University of Oxford) addressed the efforts to overcome the shortcomings of a PfRH5 vaccine using the information learned from the Rh5 vaccine mAbs studies to design improved vaccines using structure-guided knowledge. A redesigning of RH5 showed thermal stabilization and had the same binding, immunogenic and structural properties as the wild type RH5. Then, by computational immunogen grafting, an Rh5 immunogen was designed to prevent growth inhibition by 9AD4.

In relation to transmission blocking vaccine (TBV) development, David L. Narum (NIAID, NIH) presented an update on the Pfs230 and Pfs230-Pfs48/45 candidates. Pfs230D1M-EPA formulated with Alhydrogel induced functional activity in a study with US adults and contains at least two functional epitopes. Polymorphisms appear to be limited. Pfs230D1M(-EPA) alone or in combination provides a platform for TBV development. David Mekhaiel (University of Oxford) presented the Pfs48/45 vaccine candidate which is expressed from stage III gametocytes onwards and acts as an anchor for PfCCp complex. Pfs48/45 has advantages as an antigen target as it is relatively conserved and can be boosted with exposure. C. Richter King (PATH Malaria Vaccine Initiative) presented strategies for improving the potency and durability of TBV through structure-based vaccine design. The goal and challenge for next-generation vaccines is to produce durable cross-strain efficacy. Durable vaccine efficacy may not be achievable by recall responses since antibody levels must be at an effective concentration during exposure. To complete the TBV talks, Arianna Marini (University of Oxford) spoke about the HBsAg-based virus-like particles (VLPs) vaccine platforms and showed a promising, novel TBV candidate. In the plug-and-display technology the HBsAg is fused to SpyCatcher and decorated with various TBV antigens fused to SpyTag. The SpyCatcher::HBsAg platform allows the presentation of antigen in the orientation of choice and enhances the functionality of antigen specific antibody response. The response against the carrier did not have an impact on the antigen-specific response.

The second day ended with a talk by Flavia Camponovo (Swiss TPH and University of Basel) on modelling and simulations to investigate different use scenarios for vaccines, namely for control, elimination, and prevention of malaria resurgence. She discussed some of the main objectives of using modelling and simulation such as determining the best time point for seasonal intervention or when conducting a mass intervention such as vaccination targeting the entire population.

This daily report has been written by Rebeca Santano and Robert Mitchell (ISGlobal) as part of the MESA Correspondents program. Senior editorial support and expertise have been provided by Dr Carlota Dobaño (ISGlobal). 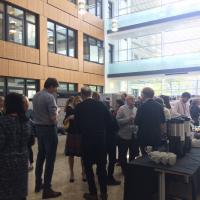 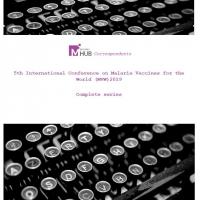 Reducing the malaria burden in Nigeria