Silvia N. Kariuki (KEMRI-Wellcome, Kenya) gave a riveting talk titled “Red blood cell tension protects against severe malaria in the blood group variant Dantu”. In their study they aimed to characterize P. falciparum invasion into red blood cells (RBCs) and the RBC membrane structure across genotype groups (Dantu homozygous, heterozygous, and non-Dantu). They found that Dantu polymorphism inhibits the invasion of RBCs by P. falciparum and that the effect is mediated by membrane tension rather than membrane protein expression levels. Their research on membrane tension proposes a novel concept of tension thresholds for successful P. falciparum invasion. Kariuki closed her presentation by raising unresolved questions, such as the role of their model in explaining other features of P. falciparum invasion and its applicability to other polymorphisms protective against malaria.

In the second talk of the session, Yaw Aniweh (University of Ghana, Ghana) presented his work on the role of Plasmodium falciparum merozoite-associated armadillo protein (PfMAAP). Motivated by the question of what protective proteins they might find in a malaria-endemic setting, Aniweh had collected plasma in a study site in Ghana to investigate immunoglobulin G proteins. During the presentation, Aniweh described how they explored different features of the PfMAAP protein and its functional characteristics in detail. In the end, he highlighted a late-stage expression, dual localization pattern, and expression in gametocytes. Importantly, antibodies to PfMAAP inhibit merozoite invasion of erythrocytes.

Kathryn J. Wicht (University of Cape Town, South Africa), presented findings from a study on P. falciparum chloroquine resistance transporter (PfCRT) point mutations and antimalarial drug susceptibility in the parasite. Their study aimed to investigate whether PfCRT point mutations found in South East Asia could influence drug phenotypes and therefore piperaquine resistance in Africa. They found that PfCRT point mutations could decrease the sensitivity of African parasites to piperaquine, whereas specific mutations (F1451 and G353V) would increase susceptibility to common quinoline-based antimalarial drugs. Widespread DHA-PPQ use in Africa may therefore cause PPQ resistance. In their future work, Wicht is interested in exploring other newly emerging point mutations and editing them into African parasites, as well as conducting cellular transport studies.

In his talk ‘Discovering new therapies for non-falciparum Plasmodium species from the field’, Laurent Dembele, (MRTC-USTTB, Mali), addressed the urgent need for new candidate therapies for non-falciparum parasites, especially in sub-Saharan Africa. He presented findings from two studies, focusing on P. malariae and on P. vivax. Only piperaquine was found to be effective for P. malariae, whereas the effectiveness of artemisinin combination therapies was compromised. These results suggest a need to readjust the current P. malariae treatments. The second study presented found that plasmodium liver-specific protein 2 expression coincided with the beginning of liver-stage development and was a marker of active hypnozoites that cause relapses in P. vivax infections. The results add an important molecular feature to the definition of plasmodium hypnozoites and will be useful for designing novel in-vitro assays for measuring anti-relapse drug effects. 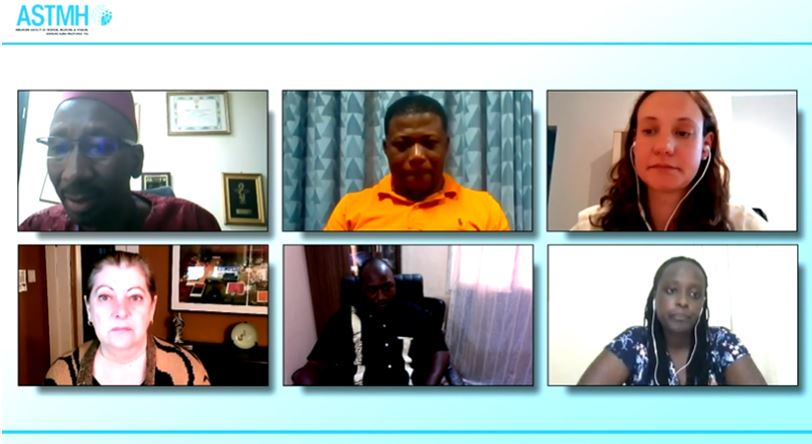 Opening the floor with a word of welcome the symposium organizer Siddhartha Mahanty (University of Melbourne, Australia) gave a brief introductory talk about each of the speakers.

Meta Roestenberg (Leiden University Medical Centre, Netherlands) addressed that “heterogenicity” is an important factor for drug and vaccine efficacy clinical studies. In controlled human malaria infection (CHMI) studies, the variability in the initial parasitemia or parasite growth rate affects vaccine efficacy results. Importantly, immunological aspects differ between two populations (from non-endemic and endemic regions) that need to be further unravelled and adjusted for in modelling. Roestenberg also showed a study with a controlled human hookworm infection model. This model suffers from variability in egg excretion within individuals as well as variability between individuals, affecting the power of the model. Nevertheless, egg counts were generally similar to the natural setting. The model can now be translated to endemic populations to understand the heterogeneity between non-endemic and endemic populations in their response to hookworm. Lastly, Roestenberg presented a model for schistosomiasis. Circulating anodic antigen released by the parasites was measured in human serum. The result showed little heterogenicity due to the stable antigen excretion from the parasite. The schistosomiasis model is highly sensitive but less representative of endemic populations because of low infection levels and the single-sex nature of the infection. Capturing heterogenicity is essential to bridging the gap to the field. Roestenberg concluded that "controlled human infection is vital as it bridges the gap between animal models and targeted populations".

The presentation by James S. McCarthy (University of Melbourne, Australia) on CHMI began with the history of CHMI for antimalarial drug testing. He showed that CHMI studies are a rational pathway for down-selecting drugs. For example, the CHMI approach was used to study PK/PD of Actelion-451840. Also, as mentioned earlier by Roestenberg, the approach is also helpful for testing candidate vaccines, such as recombinant P. falciparum circumsporozoite proteins. CHMI can tell us whether the selected antigen or the elicited immune response are right. Intriguingly, CHMI was used to evaluate the immunological protection against sporozoite inoculation in humans. Currently, CHMI is employed to study the protective efficacy of transmission-blocking interventions (drugs and vaccines). These include challenging people with genetically modified rodent malaria parasites to protect them from P. falciparum infection, or chemically attenuated parasites to elicit an immune response in naïve volunteers. Finally, he addressed the usefulness of CHMI to study human malaria parasites that have no in vitro model such as P. malariae. The contribution of CHMI benefits our understanding of biology, immunity and pathogenesis of malaria parasites.

Melissa Kapulu (KEMRI-Wellcome Trust Research Programme, Kenya) reported on the role of the CHMI model as a potential solution for leveraging human infection studies and understanding immunity in endemic populations. Broadly, their CHMI model aims at understanding the role of pre-existing immunity in relation to parasite growth in addition to identifying key parasite targets that can be prioritized for vaccine development. Based on experience from Kenya where currently three CHMI and anticipated CHMI transmission studies are ongoing, many illuminating outcomes have already been noted through a view from the field. CHMI has shown that volunteers are either susceptible or resistant based on their antibody responses; this later could further be dichotomized in high immune and slow-growth parasitaemic patients. This model could also help in assigning participant susceptibility based on the residence in high- or low-transmission settings. The CHMI model was found to be a powerful tool in comparison to field cohort studies in examining correlates of infection. However, the contribution of pathogen exposure and modulation of endpoints to the outcome of human infection studies in endemic settings remains to be addressed. 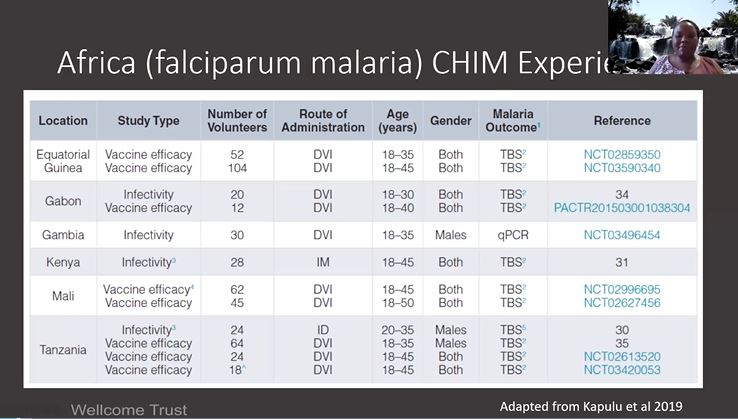 The last speaker, Anna Durbin (Johns Hopkins Bloomberg School of Public Health, United States) discussed the COVID-19 human challenge models, which could quickly help in selecting efficacious vaccines or treatments against SARS-CoV-2. For the design of such trials, the World Health Organisation (WHO) recommends consideration of the volunteer’s age, mental health condition, establishment of a robust informed consent process, designing facilities with a high level of containment and long-term monitoring of both volunteers and staffs, and conducting the trials with well-characterised challenge strains of SARS-CoV-2 virus. These precautions are mostly due to potential complications that include cardiovascular, respiratory or multisystem inflammatory syndromes which could occur during or after the trials. In addition, a more than six-month period of observation should follow for each cohort of challenged volunteers. Durbin reminded the attendees that at present, 11 candidate vaccines against COVID-19 are at varying stages of evaluation, and preparations for large-scale manufacture are already in place for several of these.

This report is brought to you by the MESA Correspondents. Senior editorial support has been facilitated by the Organizers and Co-Chairs of the symposia, Valentina Mangano (University of Pisa) and Julie Chaccour (Independent Consultant). This report is cross-posted on the MESA website and on MalariaWorld.

Towards Elimination of Malaria in Tanzania (TEMT)