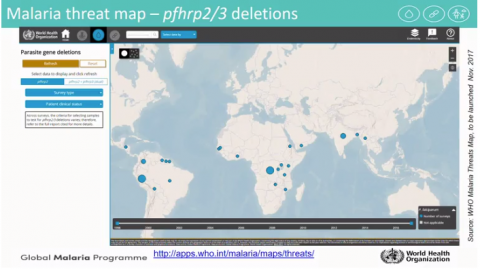 Session 62 of the 66th Annual meeting focused on understanding and managing the threat of PfHRP2/3 – negative Plasmodium falciparum parasites which cannot be detected using HRP-based malaria rapid diagnostic tests (RDTs). Emphasis was put on the fact that, where PfHRP2/3 deletions occur, the current and most frequently used RDT could face reduced efficacy in the near future. Therefore, there is a pressing need to develop new diagnostic tests, especially considering that such tests undergo a lengthy development process before they can be brought to market.

Thomas E Wellems from NIAID in Bethesda, United States, talked about the discovery of the HRP2 antigen and its journey from bench to bedside. Thomas described the process of development, dissemination, and use of the PfHRP2/3 antigens in Malaria Rapid Diagnostic Tests (RDTs), which have provided a good point of care diagnostic tool to guide the use of antimalarial drugs. However, PfHRP2/3 deletions in P. falciparum parasites are increasingly being reported in multiple studies in different sites, such as the Amazon Region of Peru or the Democratic Republic of the Congo. Thomas posed the following question: “Are there alternative antigens with the desirable features of both PfHRP2 and LDH (lactate dehydrogenase, another antigen currently targeted by some RDTs) combined?” Results are showing that using LDH antigens or Plasmodium falciparum insulin degrading enzyme homolog (PfIDEh) antigens in an immuno-PCR system can detect parasites with high sensitivity (less than one parasite per microliter). He concluded that using alternatives to HRP2/3 together with novel methods to improve sensing of bound antibodies would greatly improve test sensitivity of malaria RDTs.

Jonathan B Parr from the University of North Carolina, United States, presented new techniques for identifying Pfhrp2/3 deletions and understanding their evolution. The work involved a detailed comparison of six published PCR protocols to test for Pfhrp2/3 gene deletions. Results showed that all assays vary in their limits of detection, extension temperature seems to have an effect on sensitivity and amplification of the paralogous gene can cause spurious results. All of these technical challenges could lead to misclassifying Pfhrp2/3 gene deletions. He stated that accurate molecular confirmation of Pfhrp 2/3 deletions is challenging without careful laboratory protocols, but that alternative approaches such as luminex-based platforms are under development.

Rhoel D. Dinglasan from the University of Florida, United States, presented novel P. falciparum biomarkers: Discovery and testing results. The aim of this work was to develop a lateral flow immunoassay that does not rely on using a blood sample. Rhoel and his team set out to find a new biomarker for malaria that is present in non-blood biofluids, is expressed in both asexual and gametocyte stages, and is conserved across the five Plasmodium species which infect humans. He shared the results from a prototype saliva-based malaria rapid diagnostic test that uses the Plasmodium secreted sexual stage protein 17 (PSSP17) as a biomarker, and is currently being tested with saliva taken from “asymptomatic” children from several schools in Cameroon. The initial results show that the test is able to identify submicroscopic infections in schoolchildren, but it’s difficult to estimate the true limit of detection with the current samples. 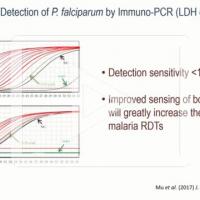 ASTMH 2017, Thomas E. Wellems: “Discovery of the HRP2 antigen: The journey from bench to bedside” 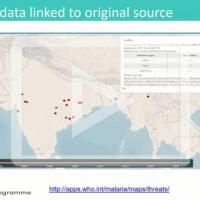 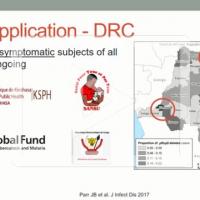 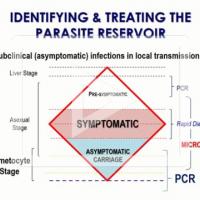